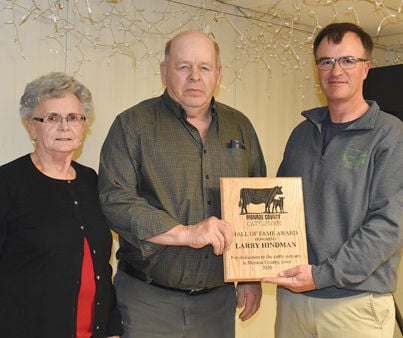 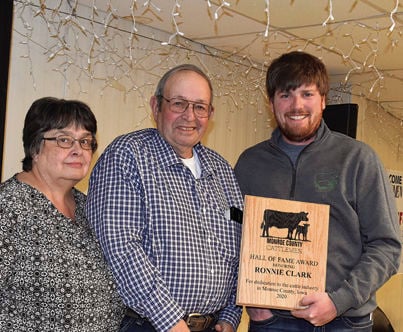 A large crowd of Monroe County Cattlemen and friends of the industry gathered Saturday at the annual Cattlemen’s Banquet at the Albia American Legion Hall.

Larry Hindman and Ronnie Clark were inducted into the Monroe County Cattlemen’s Hall of Fame and scholarship recipients were named.

Larry Hindman was the first Hall of Fame member introduced. Hindman worked 59 years in the trucking business, hauling cattle to 25 surrounding sale barns and 31 states from Oregon to New York and North Dakota to Texas. He started driving as a 17-year-old with his father in 1957, driving a 1950 International tractor-trailer, using a temporary license he got from the Monroe County Sheriff.

Over the years, five Hindman family members were in the trucking business, including Larry’s grandfather, Wallace, his Uncle Harold, his father, Jack and older brother, Jack.

Wallace started in 1926 with a Model T truck. Larry would drive over 6.5 million miles, owning 11 different tractors. His first load of cattle was for Mike Knowles in 1957.

Larry and his wife, Donna, have four children, Kim, Vicki, Mike and Mark and eight grandchildren. His retirement is being spent at grandchildren’s ball games and at livestock shows.

Ronnie Clark started feeding his own cattle in 1968, starting with 100 head of feeder calves. His farming roots in Monroe County go back to the founding of Monroe County when his great-great-grandfather, Wareham G. Clark settled here. Ronnie farmed with his father, Lloyd early on and today farms with his brother, Larry, and nephew, Curtis.

Over the course of over 50 years of farming, Clark has operated a cow-calf herd, has fed out feeder calves and has sold yearlings. He got out of the fat cattle business a couple of years ago, but still runs a 50-cow herd and sells his feeder calves each fall.

He and his wife, Marlene, have been married 51 years and she has been a steady partner in his farming enterprise. The Clarks have three daughters, Cheryl, Suzanne and Katie, who showed cattle at the county fair.

See Gov. Cuomo's response when asked about running for president

Study: Over 700 Iowans will die from virus

The Cattlemen introduced Briana Wolfer as the owner of the Governor’s Charity Steer Show calf and the celebrity showman Justine Stevenson, founder and president of Seeds of Hope Foundation.

Wolfer shared some of her expriences at the state fair, including meeting Gov. Kim Reynolds, raising $14,911.88 for the Ronald McDonald House and answering questions from a man who asked her what the difference between a steer and a bull was.

The Monroe County chose Justine Stevenson as their celebrity showman through contacts with Bryan Reed and the Iowa Farm Bureau. Stevenson founded Seeds of Hope after her husband, Chasen, died at the age of 31 after a 19-month battle with an aggressive form of cancer. Chasen Stevenson was active in the Marion County Farm Bureau and the Marion County Cattlemen’s Association.

The Seeds of Hope Foundation operates in his memory and supports other farm families who loved ones are diagnosed with a long term illness. In showing Wolfer’s steer, Stevenson captured one of three top awards given during the show.

The Monroe County Cattlemen presented Stevenson with a check of $875 from the sale of t-shirts promoting Monroe County’s entry and Seeds of Hope.

There were two other speakers at the gathering including Matt Deppe from Iowa Cattlemen’s Association and Dustin Hoffman from Iowa Agribusiness Radio, a farm radio marketing group owned by Russ Parker of rural Lovilia.

Deppe told the group that even though the cattle market was not the best it has ever been, the need for cattlemen engaging with the public, through education and in politics was as important as ever.

“We have to be out in front of people,” he said. “Students, politicians and consumers, helping them understand and gain clarity about our industry.”

Deppe said that in typical political fashion, there were a number of bills before the legislature involving environmental regulations that made no sense, but that the work ICA was doing was making legislators aware of the cattle industry and its needs.

He said the ICA was one of the nation’s leaders in creating transparency in marketing cattle and had put together a coalition of smaller states to go up against Texas, Oklahoma, Kansas, Colorad and California to push through greater transparency.

Farm broadcaster Dustin Hoffman, a farm kid from Morgan, Minn., added levity to the program. Hoffman described growing up on a very small (160 acres) southwest Minnesota farm during the ag crisis of the late 1980s and early 90s. He shared a story about having to scoop manure when other farm kids were getting to use skidloaders to which his father replied, “A scoop shovel never fails to start.”

He compared that to the people who rely on farmers and cattlemen to always start. “You’re the shovel,” he told the crowd. “The job needs to get done regardless of the weather or other conditions and people can depend on you.”