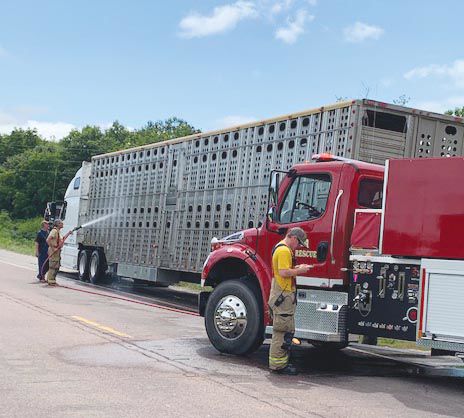 It might not be as exciting as saving a baby from a burning building or even a kitten from a tree, but the semi truck driver and the owners of a semi load of hogs were eternally grateful to the Albia Volunteer Fire Department for answering the call to a stalled semi on the side of the road north of Albia Highway 5. Firefighters brought out a tanker truck and hosed down the overheated market hogs in blistering heat on Tuesday until the truck was repaired. 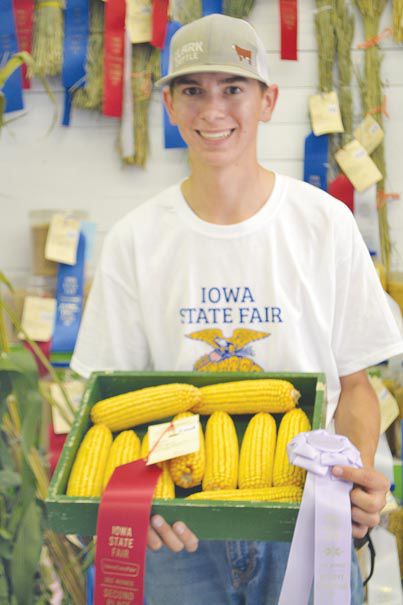 Curtis Clark exhibited the second place set of 10 Corn Ears which was also selected as the Reserve Champion entry in the Field Corn Division of the FFA Farm Crops Show.

It might not be as exciting as saving a baby from a burning building or even a kitten from a tree, but the semi truck driver and the owners of a semi load of hogs were eternally grateful to the Albia Volunteer Fire Department for answering the call to a stalled semi on the side of the road north of Albia Highway 5. Firefighters brought out a tanker truck and hosed down the overheated market hogs in blistering heat on Tuesday until the truck was repaired.

Curtis Clark exhibited the second place set of 10 Corn Ears which was also selected as the Reserve Champion entry in the Field Corn Division of the FFA Farm Crops Show.

Chances are pretty good that Albia will soon have a station for electric cars to recharge. Chariton Valley Electric Cooperative passed its first hurdle Tuesday when the Monroe County Board of Supervisors gave its approval to accommodate electrical hook-up when it wires the new HVAC system at the courthouse.

The Albia Community High School Aspire Class, which completed its first year, attended the Governor’s Future Ready Iowa STEM Summit at the Iowa Events Center for the first time.Michael Thomas, who was nominated, interviewed and chosen as a Model Student representative, served as the only student on the Work-based Learning Changes, a panel of business leaders, teachers and student.

The Albia City Council voted unanimously to appoint Kathy Mobley to serve the expired term of Bryon Stilley for Ward 1.

For a week each May, 70 veterans are provided the opportunity to put aside physical and mental disabilities and enjoy a fishing experience at Lake Rathbun. Casting Away Disabilities, a privately funding program through the Veteran’s Administration, was back at Honey Creek Resort on Lake Rathbun, making a visit to Albia on Tuesday evening for a dinner at the American Legion and a visit to the Welcome Home Soldier monument.

Albia Community High School Music Department took a trip to Mid-Prairie High School in Wellman to perform at the State IHSMA Contest. This involved 110 high school musicians. In an historic moment, the Concert Choir under the direction of Alex Steines received straight Division I ratings and two perfect scores (40 our of 40). This was the fifth straight year the Concert Choir has received a I rating.

For the second straight year, Albia Community High School has been recognized by the Iowa High School Musical Theater Awards (IHSMTA) with awards and honors for their November 2018 production “Hello, Dolly!”

Over $225,000 in scholarships were awarded to Albia Community High School seniors at the annual awards night.

The Albia City Council gave approval to dedicated two parking spots for electric vehicle battery charging. Chariton Valley Electric Cooperative Manager Charles Van De Pol was at the meeting to discuss the proposal that had already passed the Monroe County Board of Supervisors.

Since its establishment in 1990, the Rino and Ruth Della Vedova Scholarship Trust has provided over $1.38 million in tuition, book and lab expenses and room and board for Albia Community High School students.

This marks the second year that local State Farm Agent Wes Aeschliman has partnered with Lincoln Center third graders to show kindness to those in their communities. Students in Brandi Strickler’s class wrote letters to Aeschliman asking him for his help to spread kindness by sponsoring two projects this year, the first being a day of planting flowers at Lincoln Center in an area they wanted to make more beautiful, and the second to help others in nearby communities.

In a 24-hour period from early Tuesday morning to early Wednesday morning, Albians found at least three inches of rain in their gauges. According to Ross Reyemeyer, who keeps official track of the weather in Monroe County, the total rainfall in May at his weather station was 10 inches.

The Albia Newspapers and sister publications Moraiva Union and Chariton Leader and Herald-Patriot have renamed their weekly shopper product to more closely reflect the distribution area. The Highway 34 Corridor and More Shopper is the new name for the publication, which is distributed through Lucas and Monroe County and in the northern part of Appanoose County.

The state of Iowa is responding to drivers who do not like the new design of the license plate and aren’t interested in any of the other specialty plates. Other states have been offering “Black Out” plates for the same reason.

Mindless, senseless vandalism occurred in broad daylight in the historic Woodlawn Cemetery in Lovilia where 15-20 headstones were damaged.

Heavy rains definitely put a crimp in Saturday’s Rodders Car Show and Bob Reed Memorial Tractor Show, but 93 cars finally arrived and the show grew throughout the afternoon. There were a total of 18 tractors in the show, driven by hardy farmers through pounding rain. By the time winners were named and cash prizes given out, the sky was bright blue and the weather perfect.

On Thursday, June 20, Bob Quinn, co-host of WHO Radio’s, The Big Show, traveled to the Rathbun Lake Watershed to conduct a live broadcast of his show from Rathbun Regional Water Association’s Water Treatment Plant. The Big Show, which airs each week-day, is an agricultural show that serves Iowa and portions of surrounding states.

The Albia City Council voted unanimously with Councilman Brian Bell thinking long and hard before casting his vote, to proceed with an ordinance allow UTVs (Utility Vehicle) on city streets. It was only the first reading and changes can be made to the proposed ordinance that allows the vehicle to travel on all city of Albia streets except Highways 34, 5 and 137. The ordinance further states those driving on Albia streets must be 18 years of age and have a valid drivers license. The UTV must be inspected with the driver having proof of insurance and a valid driver’s license.

Sarah Scott Gustafson a 42-year-old mother of two, the daughter of Gary and Carol Scott of Albia, finished her first half ironman triathlon in Benson Harbor, Mich., on June 30. The Ironman Steelhead 73 combines a 1.2 mile swim, 56-mile bike ride and half-marathon (12+ miles). Gustafson finished in six hours, 33 minutes, 37th out of 67 in her 40-44 age group. There were 492 women in the race (which was run with even more men).

The Albia Lady Dee softball team headed back to the state tournament in Fort Dodge. A three-run home run by Jena Lawrence in the bottom of the eighth inning gave the Dees a 9-6 victory over 12th ranked North Polk. Fifth ranked Albia (27-4) entered the tournament as the #4 seed.

With an expensive restoration of the exterior of the Monroe County Courthouse and new sidewalk and courtyard repair, the Monroe County Board of Supervisors listened to a plan to literally “spruce up” the courtyard. Catherine Burkman and Dave Johnson approached the board about removing 33-year old spruce trees planted each of the corners of the courthouse that are now 30 to 50 feet high and in tough shape.

You just never know what is going to trip somebody’s trigger in this world of social media. The Albia Newspapers ran a front page photo of the Albia Volunteer Fire Department coming to the aid of a truck driver whose semi stalled on the side of the road with a full load of hogs. The photo showed firemen hosing down the hot hogs. Then we posted the picture on our Facebook page. To date, the photo has 1,041,000 million viewers reached, 59,000 shares and 14,000 likes. Only the huge Welcome Home Soldier Rally and the theft of Denny Roby’s bicycle and its replacement were even close to those numbers.

The Monroe County Board of Supervisors voted to allow the Victorian Stroll Committee and Albia Area Improvement to take out 33-year-old spruce located on each of the corners of the courthouse and replace them with new trees.

The Albia Area Chamber of Commerce announced the 2019 Hall of Fame recipients were Dr. William R. Adler and Charlene Crall. The inductees were recognized on Saturday, Aug. 3 following the Restoration Days parade, at the bandstand, on the Courthouse lawn. A reception was held in their honor immediately following at the Chamber office.

Albia Rotary Club raised nearly $30,000 to add another major improvement to the Albia Reservoir Park. A new restroom facility (like the restroom on the south side of the lake) was installed near the Rotary Club shelter and Eagle Scout fire pit. The restroom serves the north side of the park which includes sand volleyball courts, the shelter, fire pit and prime fishing locations. Funds came from the Rotary Foundation, Albia city parks fund and private donations.

The Albia City Council passed the first reading of an ordinance that allows UTV (Utility Vehicles…not ATVs) to join golf carts on travel on city streets at their Monday meeting. The new ordinance, brings golf cart use under the same ordinance as UTVs using the same rules.

An outbreak of Epizootic Hemorrhagic Disease (EHD) has impacted deer primarily in south central Iowa with the largest concentration of infected animals being reported in Warren County. Deaths have been reported in Monroe and Appanoose Counties.

A high-speed chase that began in Pella turned into a pursuit on foot by Iowa State troopers and Monroe County deputies and Albia police officers. It ended without injury or incident with the arrest by the state patrol.