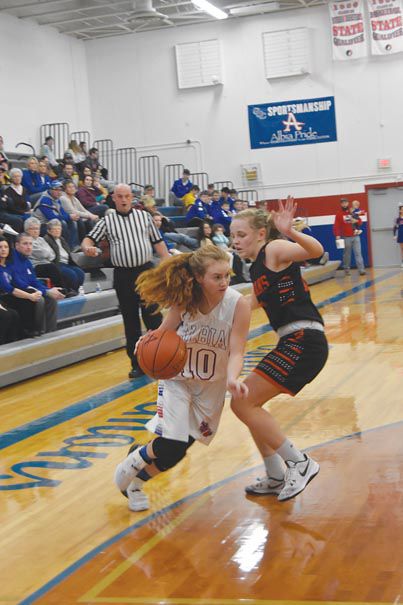 Danica Workman drives the baseline against a Pleasantville defender. Workman had one of her best games of the season with 12 points and five rebounds. 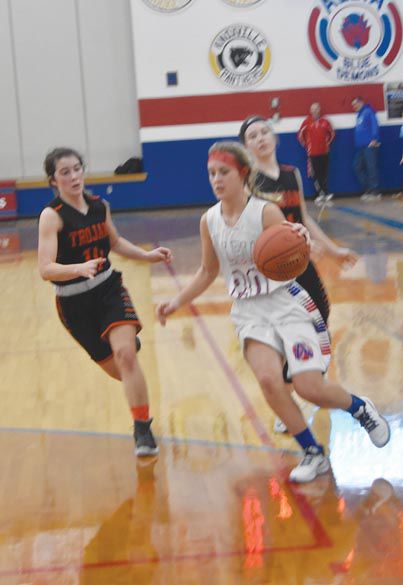 Danica Workman drives the baseline against a Pleasantville defender. Workman had one of her best games of the season with 12 points and five rebounds.

The Albia Lady Dees offset a 19-point, nine-rebound performance by Pleasantville post Malorie McKinley with a scrappy full-court press, great rebounding and very good shooting in the final minutes of the game and into overtime to win their second game of the season 51-46.

McKinley, a deft 5’10” post, had pretty much the entire Lady Dee front line in foul trouble in the first half. Pleasantville went to the line 45 times in the game, a large share of that in the first half. Unfortunately for the Trojans, they converted just 20 shots. McKinley was nine of 19 from the line. Albia shot 12 of 23 free throws in comparison.

Pleasantville jumped to an 8-2 lead only to have Albia tie it at 8-8 with junior guard Danica Workman leading the way. But the Trojans hit a shot late to take a 10-8 lead at the break, then outscored Albia 8-2 in the second quarter with Coach Katy Dykes searching for front court combinations to protect Ayana Thomas and Jenny Kelley from picking up their third fouls.

Freshman Paige Kidney came in and with her 6’0” frame disrupted the Pleasantville post game.

Trailing 18-10 at the half, the coaching staff also lit a fire under the Lady Dees. Coming out of the break, the Dees almost immediately found their stride offensively and also started taking the game to Pleasantville, led by the scrappy play of Allison Major. Albia outscored Pleasantville 15-10 in the third quarter to cut the lead to three points at the break.

Albia took the lead with about five minutes left, 33-32, and were up two with a second left in the game with Pleasantville controlling the ball under their basket. McKinley set up under the basket, moved out to pick, then curled back (as she had all game), got the ball and scored, sending the game into overtime.

There was no panic with the young Dees. They exploded out of the overtime, scoring the first six points and never looked back, outscoring the Trojans 10-5 to capture the six-point victory.

Former Arizona Wildcats DC Marcel Yates gets a new job, and it's in the Pac-12

Albia’s scoring was about as balanced as you could get with Ericka Archibald leading the team with 14, Workman scoring 12, Halle Hindman nine, Sophie Waber seven, Thomas five, and Kelley and Major two each.

The rebounding statistics really tell the tale of the game. Albia outrebounded the much taller Pleasantville team 59-45, led by a nine-board night by Thomas. Hindman had eight, Archibald and Major six each, Workman, Kelley and Kidney five each, Abbie Martin and Lauren Kaldenberg three each and Waber two.

“We scored 41 points from halftime on,” said Coach Dykes. “Danica (Workman) really played a smart game, taking open shots from the perimeter and driving in and scoring when lanes were open. Ericka (Archibald) was really outstanding in her shot selection and Halle (Hindman) and Sophie (Waber) made our offense work with three assists each. We didn’t get as much production out of our front court because of foul trouble, but as a group they rebounded well and played good defense. Only one other Pleasantville player was in double figures with 11 points.

Albia moves to 2-5 on the season and meets Knoxville Friday and hosts Fort Madison in an afternoon game on Saturday.