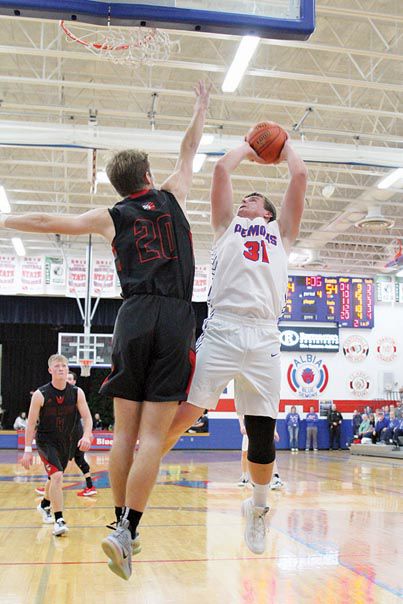 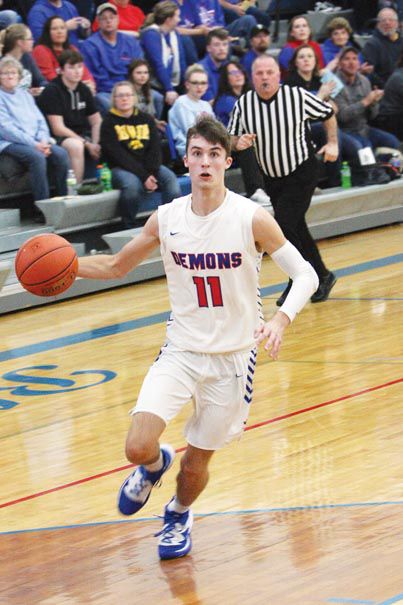 Blake Chance looks for teammates on a fast break.

Blake Chance looks for teammates on a fast break.

Sophomore Jackson Pence came up with a huge double-double scoring 16 points and hauling down 11 rebounds as the Albia Blue Demons pounded Centerville 76l-57.

The Blue Demons had another double-double player but it was in scoring and assists. Blake Chance scored 15 points and had 15 assists in the game.

The Albia Blue Demons used a workman like effort to collect their third SCC victory in the 2019-20 season .

The Blue Demons opened the scoring with a three point goal by Brayden Messamaker and edged into a 10-3 lead only to have the Big Red hit successive three point goals and added a conventional three point play to take a 12-10 lead with three minutes left in the first quarter.

Centerville was able to tie the game 23-23 with five minutes left in the half. Albia responded with a flurry of points in the paint as Joe Teno put up eight points in the period and Drew Chance added four points. The Albia defense allowed only three points in the final five minutes of the half while Albia built a 40-26 advantage.

The SCC rivals traded baskets throughout the third period with Albia maintaining a double digit lead and entered the final eight minutes with a 59-49 margin. Pence scored eight of Albia’s 19 points in the third on great inside play.

In the fourth period the Blue Demons continued to keep Centerville at bay and with the score 65-54, Albia went on an 11-3 run to seal the victory.

Pence led Albia in scoring with 16 points while Blake Chance dropped in 15, Nate Wynn added 14, Messamaker 12 and Teno 11. Blake Stewart and Drew Chance had four each. Blake Chance dealt out 15 assists on the night while Messamaker and Wynn had two each.

The Blue Demons improve to 3-0 on the season.