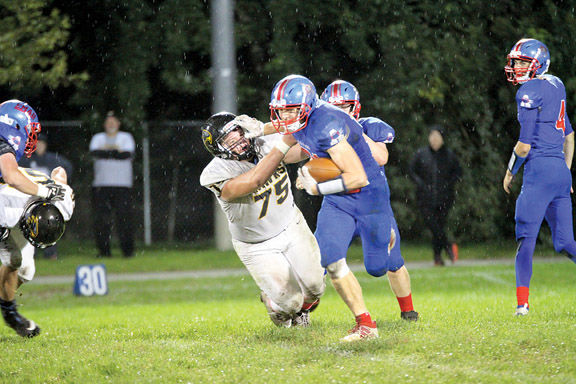 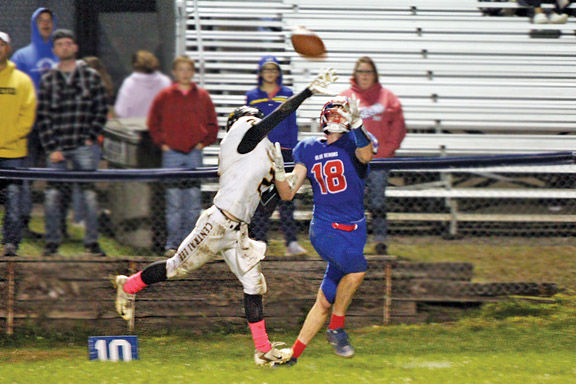 Nate Wynn catches a Blake Chance throw for a touchdown, seeing the ball through near perfect defense. (Terry Simmons photo) 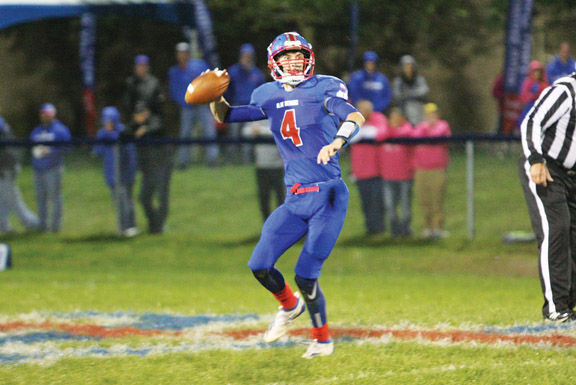 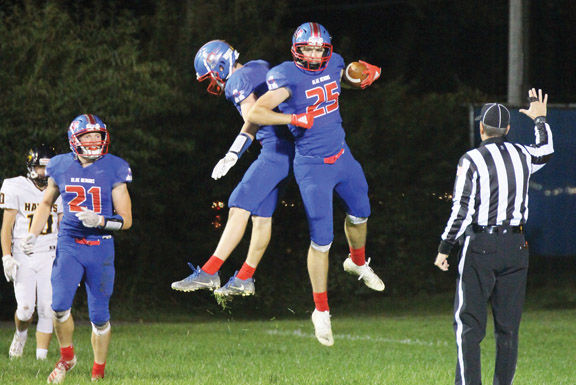 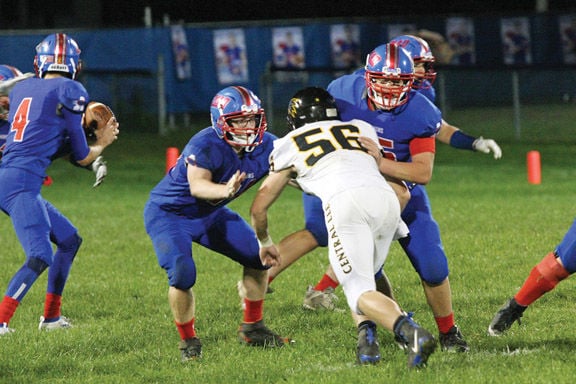 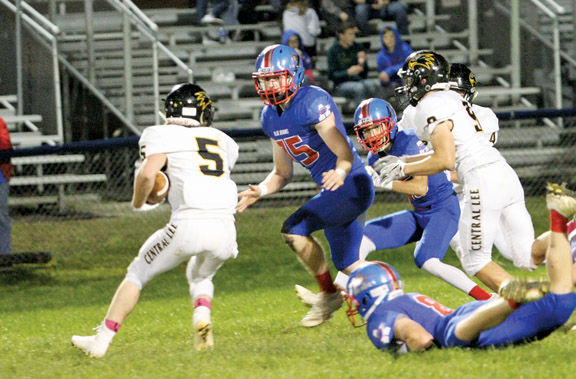 Nate Wynn catches a Blake Chance throw for a touchdown, seeing the ball through near perfect defense. (Terry Simmons photo)

Just about everything that could go right, did go right in the first half against Central Lee. The Blue Demons turned a first play Central Lee fumble into a touchdown and proceeded to build up a 42-7 half-time lead against the Hawks enroute to a 49-18 victory.

The second half started a little sloppy for the Blue Demons and a strong Hawk rushing attack closed the gap to 42-18 before Albia righted itself in the fourth quarter, scored and then controlled the game defensively.

“We executed our game plan better than we have all season,” said Coach Scott Farrington. “In the first half especially, we cut down on mistakes, gained the momentum early and sort of rolled from there.”

Coach Farrington said that while Central Lee ran the ball well against Albia’s defense, tackling was better and overall defensive play was better, particularly with two starters out for the game.

“Take away the two big sacks against Chance and our rushing game was much improved,” he said. “Of the guys carrying the ball, we averaged about five yards a carry.”

Passing was still the Albia bread and butter.

In the first half alone, Blake Chance racked up 296 yards of passing. Nate Wynn had a sensational game receiving, catching nine balls for 164 yards, but was even more important to Albia’s ultimate success by running down two punt snaps over his head and getting off booming punts that prevented two possible scores.

Blake Stewart also had nine catches for 154 yards, Bossard had two for 35, Jackson Pence two for 12 and Chance got into the receiving act, catching a Stewart pass for 18 yards. Bossard had nine carries for 49 yards and Chance had good positive yardage until the second half when he was sacked two for big losses.

Albia ended up with 384 yards passing and 16 net yards rushing. Central Lee picked up almost all of their yards on the ground with Dalton Westercamp rushing 24 times for 121 yards and quarterback Adam Boeck picking up 114 yards on 19 carries. Boeck completed just one pass to his own players, and two to guys wearing blue. Bossard, who had 12 defensive stops, had both interceptions.

Central Lee took the kickoff out to the 30 and on their first play from scrimmage, fumbled. Chance threw seven yards to Wynn to the 27, then found Bossard on a screen pass for a 27-yard touchdown. David Fisher’s kick was good and with 11:39 left Albia led 7-0.

Central Lee moved the ball on the ground all night against Albia and had a 10-play drive moving from the 19 to the 47 before Boeck was dropped for a five-yard loss and Westercamp was dropped for an eight yard loss. A 53-yard punt rolled into the endzone.

Chance immediately went to Wynn for 15 to the 35, Bossard burst 14 yards to the 48 and Wynn and Chance hooked up for 27 yards to the Hawk 25. Albia put some razzle into its dazzle and Stewart took a pitch from Chance who rolled right and Stewart connected on a pass to the junior quarterback for 17 to the seven. Chance threw to Wynn on the next play for Albia second score. Fisher’s kick was good and Albia led 14-0 with just under five minutes to go in the quarter.

Central Lee’s biggest gainer came on a horse collar penalty against Albia, then Bossard intercepted a Boeck pass with 3:20 left. On third and 10 from the 47, Chance found Stewart who caught the ball in stride and went the distance to give Albia a 21-0 lead after Fisher’s kick.

Central Lee started at their own 39 and a 21-yard gain by Boeck and a 20-yard gain by Westercamp got the ball to the Albia 20 as the quarter ended. Boeck completed his only pass of the night to Trent Stutes, a 16-yard touchdown strike. The kick failed and with 11:15 left in the half, Albia led 21-7.

Central Lee was successful with an onside kick, but Albia held behind a Trey Sample tackle on fourth and five. The Blue Demons took over at the 32 and Chance connected on passes to Wynn and Stewart for a first down, hit Wynn for 18 yards to the 33 and lit up Central Lee with a 33-yard pass to Wynn for a touchdown. Fisher was perfect on his kick and Albia led 28-6 with 7:40 left in the half.

Albia returned the favor on Central Lee with a short squib kick that Chaz Fee recovered. Starting at the 40, Chance gained 11 on a scramble, hit Pence for nine, Bossard ran for nine to the nine and on fourth and goal at the six, hit Bossard for an eight-yard gain to the six. The next play Chance went to Stewart for the score. Fisher gave Albia a 35-6 lead with 5:32 left in the quarter.

The Hawks fought back behind a 55-yard run by Boeck to the Albia five. Boeck ran for four to the one and kept for the score. The run failed and Albia led 35-12.

There was no stopping Albia’s offense in the first half. Stewart caught a Chance pass for 36 to the Central Lee 28, a 15-yard penalty put the ball on the 13, but Chance was sacked for a loss of six. Chance came right back with a 20-yard completion to Stewart and with 26 seconds left, hit Pence for the score from the four. Fisher gave Albia a 42-12 halftime lead.

The Blue Demons started the second half like Central Lee started the first, by losing a fumble three plays into the opening drive. With 11:06 on the third quarter clock, Central Lee had the ball at the Albia 42 and pounded the ball down to the one with Boeck scoring with 7:13 left. The run failed, but Albia’s lead was cut to 42-18.

Another Chance fumble and a pair of incompletions forced a punt and the snap sailed over Wynn’s head. Wynn sprinted to about the five-yard-line, scooped up the ball and blasted a punt to the Central Lee 49. The net would be just 15 yards, but the ball actually sailed about 45 yards.

Central Lee moved to the Albia 32, tried to convert on a fourth and four and failed.

Wynn went back to punt again, the ball sailed over his head, he sprinted back to retrieve it and blasted a kick back up to the Central Lee 49. The net punt was nine yards, but it actually sailed over 40 under incredible pressure.

The Hawks picked up a first down behind Westercamp runs, but fumbled with 10:41 left in the fourth quarter.

Taking the ball at the 41, Bossard ran twice for six yards each and a first down, Chance found Stewart for 10 and Wynn for seven, then penalties dogged the Blue Demons. A 13-yard pass to Liam Winfield came back on an illegal block in the back and a 35-yard touchdown pass to Nick Heffron came back on a holding call. Albia faced first and 26, got nine back on a four-yard run by Bossard and a five-yard completion to Stewart, then Chance hit Wynn for a 42-yard pass. Fisher’s kick made it 49-18 with 5:30 left in the game.

Coach Justin Huber was upbeat after the game. “The guys finally figured out what they need to do to be successful and did it,” he said. “We still need to work on our second half play. Once we got through a series of mental errors in the third quarter, we played well in the fourth.”

The two co-head coaches are looking forward to Friday’s game at Davis County. The Mustangs had several chances to go ahead of Eddyville-Blakesburg-Fremont in a 14-7 Rocket win.

“It’s always very competitive with Davis County,” said Coach Farrington. “We need to get off to a good start and keep the momentum.”

After being idle since playing Sigourney-Keota almost a month ago, freshmen and sophomore players on the Blue Demon squad will be getting some game experience.

They play PCM next Monday, then will compete against Williamsburg and Mid-Prairie in Friday games.

“We’re actually going to set up an eight-man intrasquad scrimmage on Wednesday so our younger guys can get some game experience,” said Coach Farrington.