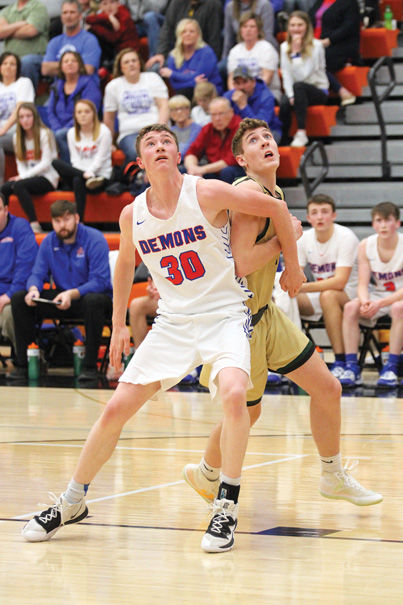 Joe Teno boxes out before hauling down one of his team high nine rebounds against Woodward-Granger. 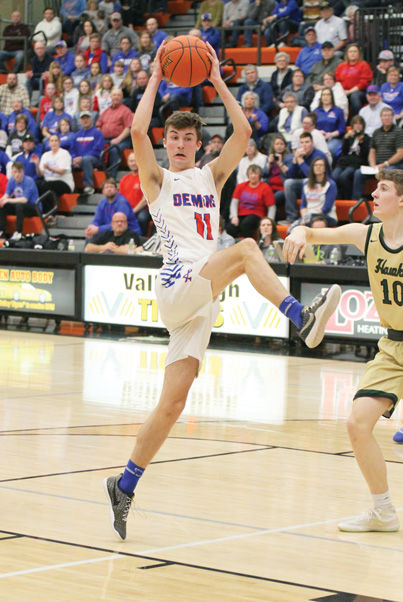 Although Blake Chance didn’t have a lot of points, his rebounding was solid and his six assists boosted his career record to 172. 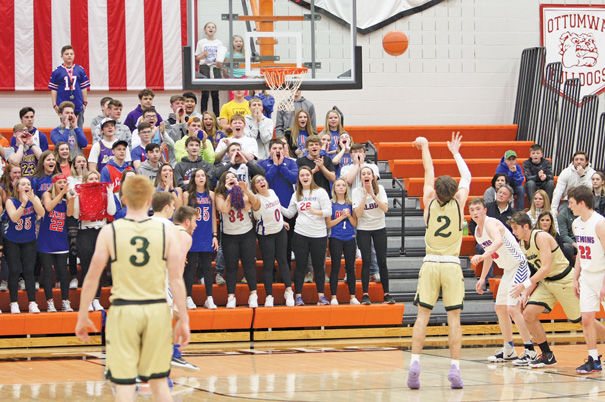 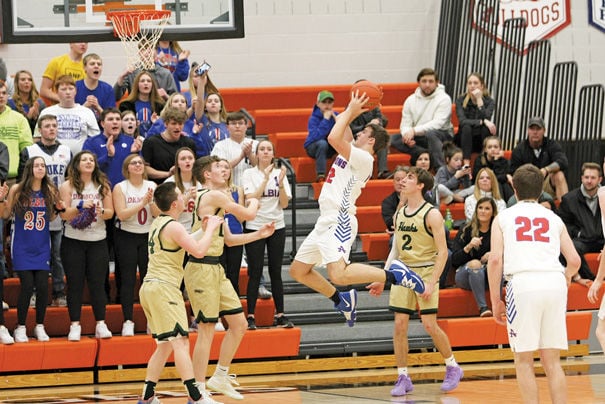 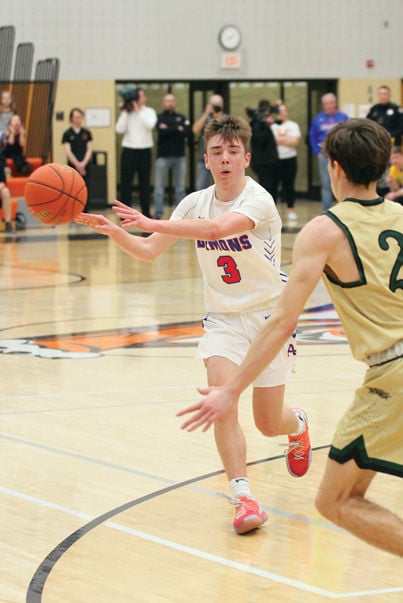 Trey Griffin throws a no look pass to a teammate coming down court. Griffin only scored two points but had a stellar defensive game against the Hawks. 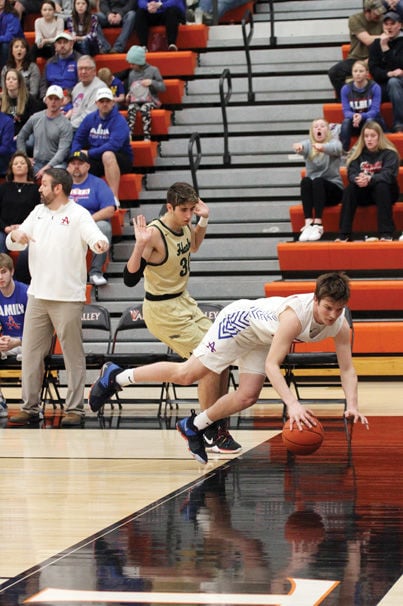 Albia junior Nathaniel Wynn got a little help heading out of bounds from a Woodward-Granger defender. No harm, no foul?

Joe Teno boxes out before hauling down one of his team high nine rebounds against Woodward-Granger.

Although Blake Chance didn’t have a lot of points, his rebounding was solid and his six assists boosted his career record to 172.

Trey Griffin throws a no look pass to a teammate coming down court. Griffin only scored two points but had a stellar defensive game against the Hawks.

Albia junior Nathaniel Wynn got a little help heading out of bounds from a Woodward-Granger defender. No harm, no foul?

In the end, the Albia boys basketball team had critical turnovers and didn’t shoot well enough to beat a team the quality of Woodward-Granger, even though they led after every quarter except the fourth. The final score was 49-43 and the Hawks scored their last five points on free throws to earn their first trip to the state tournament in almost 40 years.

And it wasn’t an official’s call that caused damage to the Blue Demon effort, even though two charging calls, one on Blake Chance and another on Joe Teno early in the fourth quarter, fueled a 7-0 run erasing a 34-30 Albia lead at the start of the fourth quarter.

However, it will be argued long and hard that a no call with about 1:50 left in the game on what could well have been a technical foul, was a seminal moment in a razor tight game.

Albia had stopped the 7-0 bleeding with baskets by Drew Chance and Nate Wynn, bringing Albia back from an eight-point deficit with 4:20 left in the game to a 42-38 margin. The Hawks scored to go back up 44-38 when Kaya Bowlsby, Woodward-Granger’s #30 fouled Blake Chance on the Hawk's side of the court. Bowlsby went ballistic, shouting at the referees, then reaching down and slamming the floor with both hands.

“I didn’t see it,” said Coach Kevin Archer. “But Tanner (Assistant Coach Kellogg) did and he reacted.”

Under any measurement of court decorum, that is a technical foul. An official was looking right at him. There was an icy stare but no “T.” Chance went to the line and made one of two shots to cut the lead to 44-39, but the Blue Demons should have had two technical foul shots and the ball. Albia could have tied the game at that point. But it didn’t happen.

Joe Teno would score Albia’s final four points, something that seemed very right for the team’s only senior whose shut down defense helped keep a high-powered Woodward-Granger offense under 50 points.

He would end his career with 10 points and 9 rebounds.

“Our defense was great,” said Coach Archer. “Only two teams held them under 50 points. The other was Van Meter. But their defense was just as good. We just didn’t run enough of our stuff to get the points we needed. When we did get looks, they weren’t bad.”

The game started like it would be a 70-point game. Brayden Messamaker drained a three, Blake Chance nailed a three and Teno buried a three to give Albia a 9-0 lead. Then Hawk big man Keith Braunschweig scored a three-pointer to cut the lead to 9-3.

But those would be the only three-point shots for either team until mid-way through the second quarter when Teno drained another three and Woodward-Granger hit two giving the Hawks a three-point lead. Albia’s ability to shoot the three was dramatically reduced when a previous back injury sustained by Messamaker flared up. He was unable to play in the second half. Albia had three, three-point baskets in the first couple of minutes of the game and one the rest of the way, ending up shooting four of 20. Woodward-Granger wasn’t much better, shooting five for 14.

“Brayden stretches defenses,” said Coach Archer. “Without him on the court they were able to pack the lane, which caused us a lot of problems.” Specifically, point guard Blake Chance had all kinds of problems penetrating and passing inside.

After being a ‘clean-up crew guy’ with Packers, Blake Martinez excited for fresh start in New York

Spring snapshot: What comes after seniors Miller and Honas at inside linebacker?

Albia slugged it out in the final minutes of the first quarter with Chance and Chance scoring to give the Blue Demons a 13-8 lead.

Albia went up 17-10 on baskets by Trey Griffin and Drew Chance. Another Drew Chance basket from an assist from brother Blake made the score 19-12 and a foul shot made it 20-12.

The Hawks scored seven straight to cut the lead to 20-19 with 29 seconds left and tied the game with a free throw. Jackson Pence scored on an offensive rebound to give Albia a 22-20 lead at the half.

The third quarter started with a three-pointer by Alex Bice and a basket by Nick Buch to give the Hawks a 25-22 lead. Blake Chance had two free throws but missed them both and the Hawks super star point guard Bryce Achenbach hit a three pointer to boost the score to 27-22.

Teno responded with a three-pointer and Drew Chance powered inside to tie the score at 27. Behind the heft of freshman Chance, Albia powered back to a 32-30 lead with 1:05 left and Blake Chance hit two free throws to let the Blue Demons enter the fourth quarter leading 34-30.

Albia’s defense was just short of brilliant in the final two minutes of the third quarter, but Woodward-Granger used quick drives to the basket and got big breaks on two charge calls against Albia to score the first eight points of the fourth quarter to lead 44-36.

The no call on the technical happened, Albia responded with free throws by Blake Chance and Teno, but the Blue Demons were forced to foul creating the final six-point margin of victory for the Hawks.

Albia was led by freshman Drew Chance with 16 points. Joe Teno had 10 points and nine rebounds, Blake Chance, eight points and padded his single season and career assist record with six (he has 172 in his three-year career), Brayden Messamaker three and Nathaniel Wynn, Pence and Trey Griffin two each.

Albia ends the season at 18-4 while Woodward-Granger enters the Class 2A tournament with a 22-2 record playing Boyden Hull (21-3).

Albia’s 18-4 record is the best winning percentage in Archer’s 19 years as head coach. His 2010 team was 19-5. This is Archer’s fifth trip to the substate game since 2006. The team advanced twice to the state tournament.

The Blue Demons lose just one senior in Joe Teno, but Archer isn’t sure how to replace the 6’4” forward. “He just did everything right all the time,” said Archer. “I don’t think I’ve ever had a player work harder in practice. He could guard anybody on the court except maybe the point guard. He covered a lot of our match-up challenges.”