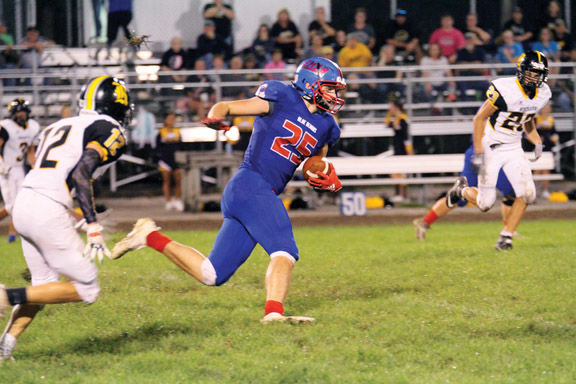 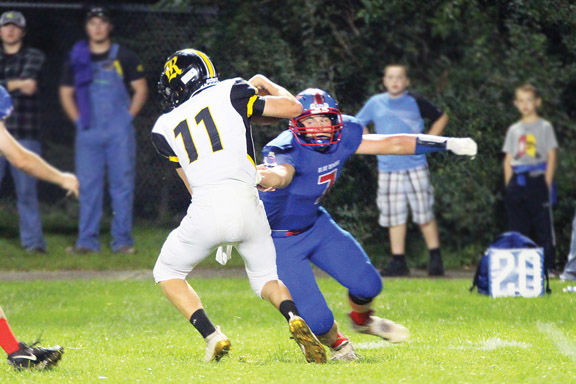 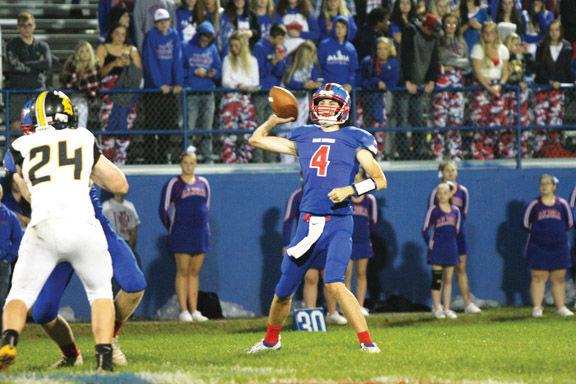 BLAKE CHANCE throws a ball into the middle of the field for a first down. Chance threw for 293 yards and two touchdowns in the game. (Terry Simmons photo) 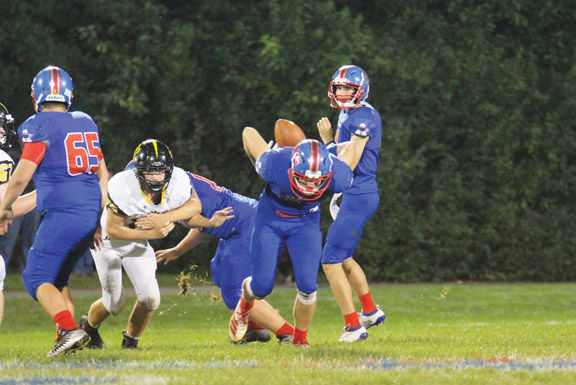 LUKE BOSSARD holds the ball behind his back with Albia’s version of the old Statue of Liberty play and gets good yardage. (Terry Simmons photo) 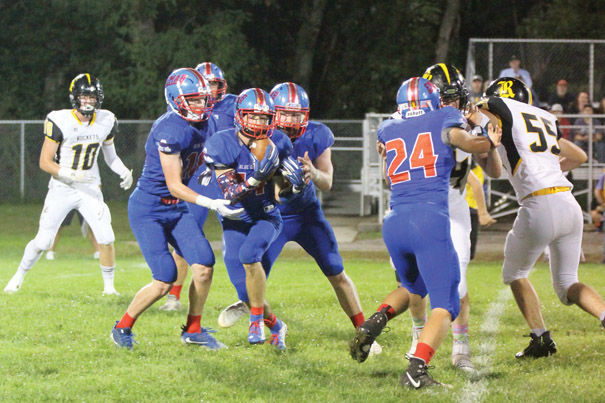 DAMON SOVERN PICKS the ball off the ground after a first half punt block by EBF and runs for a first down. (Jesse Simmons photo) 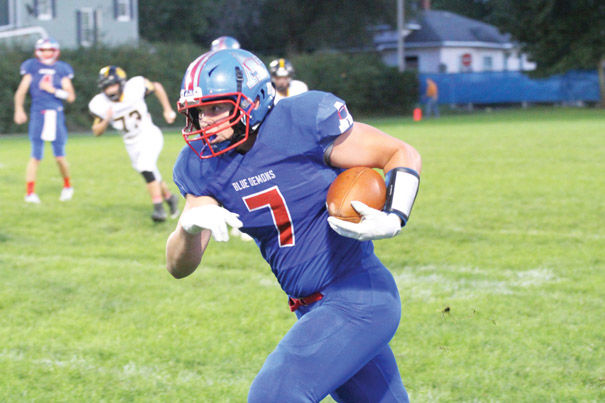 BLAKE CHANCE throws a ball into the middle of the field for a first down. Chance threw for 293 yards and two touchdowns in the game. (Terry Simmons photo)

LUKE BOSSARD holds the ball behind his back with Albia’s version of the old Statue of Liberty play and gets good yardage. (Terry Simmons photo)

DAMON SOVERN PICKS the ball off the ground after a first half punt block by EBF and runs for a first down. (Jesse Simmons photo)

If you just looked at the stats sheets, there’s no way you’d believe the Rockets of Eddyville-Blakesburg-Fremont beat the Albia Blue Demons by three touchdowns. No way.

The Blue Demons held EBF to 138 yards rushing and 161 yards passing at the same time racking up 335 yards passing and another 49 rushing. Albia had 18 first downs to EBF’s 16. And yet there it is. The Rockets spoiled the longest homecoming game in school history 35-14 on Monday night.

Monday night? The game started Friday night with an efficient Rocket drive for a score with 9:58 left in the first quarter, was halted because of lightning, restarted with EBF scoring again late in the second quarter and then suspended until Monday night. Half-time entertainment included the University of Iowa beating Middle Tennessee State and Iowa State losing a heartbreaker to Baylor on Saturday, the entire NFL schedule on Sunday and a new episode of NCIS Los Angeles Sunday night.

A whole lot of little things prevented the Blue Demons from erasing a 14-0 Rocket halftime lead.

Albia scored on a beautifully executed 10-play drive to begin the third quarter, then broke down in kickoff coverage letting Ethan Olivas run 60 yards for a score giving EBF a 21-7 lead. The defense backed up the Rockets to the 15-yard-line forcing a punt, only to suffer a roughing the punter penalty. The ball came out to the 30 and the next play Thane Alexander hit Ian Roberts for a 70-yard touchdown.

Sprint champion Kalen Walker had been covered effectively all night with just two catches, one for loss of yardage, when Walker juked an Albia defender and found himself wide open for a 42-yard touchdown pass.

“We just made a whole lot of mental and physical mistakes,” said Coach Justin Huber. “Our inability to score once we get into the red zone is really frustrating. We played so well defensively at times, then miss a tackle and give up a big play.

“We’re facing a short week preparing for Central Lee,” he said. “We’ve got to regain our focus and work to cut down on the mistakes that have been killing us.”

The painful loss and those mistakes can’t erase the fact that Albia quarterback Blake Chance threw to six different receivers and that Blake Stewart caught eight passes for 179 yards and two touchdowns. Nor can it diminish the excellent defensive play by Doug Flattery with nine tackles (including two sacks), Shawn Good with eight stops and sophomore Koby Foster with seven.

Taking the opening kickoff on Friday, the Rockets Thane Alexander found Isaiah Smith for 11 yards to the Albia 49, then threw to fullback Mason Roberts for 24. Alex Angle gained four to the 21 before Alexander threw to Ian Roberts for the game’s first touchdown with 9:58 left in the quarter. Ethan Olivas nailed the PAT and that was the last football played until 8:50 p.m. when the half resumed. Albia administrators and officials had to call the Iowa High School Athletic Association to get permission to continue the game because lightning was visible in the south. Radar said the activity was at least 25 miles away and permission was granted.

After the nearly two-hour weather delay, Olivas kicked off and Damon Sovern brought the ball out to the 24-yard line where Blake Chance went to work. A pass to Luke Bossard went nowhere, but on the next play he found sophomore Jackson Pence for 24 to the 47. On second and four, Chance hit Blake Stewart for 21 yards to the 26, but the next pass was intercepted by Ian Roberts with 7:51 left in the quarter.

Albia’s defense held up well and Alexander was sacked by Shaun Good forcing a punt with 5:39 to go in the quarter. Albia immediately went to the air from their own 27 with Chance hitting Nate Wynn for 11. Bossard picked up four, a penalty set up a second and 11 and then Stewart caught a pass good for 30 to the EBF 32, where the drive bogged down. Chance threw incomplete on fourth and eight and the Rockets took over at their own 30.

The Blue Demons held EBF to another three and out and Olivas punted to the Albia 33. Chance found Wynn again for nine to set up a third and one, but an incompletion set up a fourth and one and Albia went back to punt.

Isaiah Smith came off the left side of the line and blocked the Wynn punt, but Sovern scooped up the ball and ran for the first down as the quarter ended. After a six-yard gain by Bossard, Wynn was forced to punt again.

Starting at their own 24, the Rocket drive was slowed with a sack by Gavin Shaw, but Alexander made two beautiful moves avoiding rushers and raced 38 yards to the Albia 41. The drive, however, faltered and EBF punted again.

Albia took over at their own 19 and started shooting themselves in the foot. A holding call negated a 12-yard first down run by Bossard. Then Chance hit Stewart for a 60-yard gain and it was called back on a block in the back penalty. On third and 10, Chance found Stewart for an 11-yard completion and a first down, but an offensive pass interference penalty not only wiped out a nice gain, it forced Pence out of the game for the next couple of series. Chance got eight back with a pass to Bossard, then Nick Heffron caught a pass for 11, but Albia punted on fourth and three.

The Rockets took over at the 29 and the absence of Pence was felt at his defensive end position. Alexander threw to Kalen Walker for six and a first down, ran for 14, found Smith for seven and Angle gained six with a 15-yard personal foul penalty tacked on.

With a first down at the 14, Alexander gained, seven, then four to the three for another first down and scored with 1:38 left in the half.

Albia started to drive again with a Chance completion to Stewart for 15 yards to the 40, but the drive ended, Albia punted and EBF’s Angle lost a yard as the half ended, to be resumed on Monday after another lightning storm came up from the southwest.

Albia’s offense came out cooking three days after the end of the first half. Luke Bossard opened the drive with a nine-yard run, Chance hit Wynn with an 11-yard pass, Bossard ran for 10 and a first down, Chance found Pence for 19 to the 22, and then threw to Wynn for 11 to the 11. On a fourth and nine at the 10 Chance threw a perfect strike to Stewart to cut the lead to 14-7 after David Fisher added the PAT kick.

Fisher drilled a kick to the west side of the field where Olivas gathered it in, ran through two missed tackles and went 60 yards for the score. Still breathing hard, Olivas added the PAT kick and EBF led 21-7.

Albia came back with a little trickery when Wynn got a pitch from Chance and then threw deep to Stewart for a 34-yard gain. That drive would fizzle with two incompletions and a sack.

The Rockets started at the 26, picked up a rushing first down, then Flattery sacked Alexander for an 11-yard loss and EBF punted. Albia punted back three and out.

As the fourth quarter ended, the Rockets were pinned back at their eight, moved to the 15 and lined up to punt. On the first play of the fourth quarter, Albia rushed the punter and everyone in the stands was surprised Olivas somehow kicked the ball through several converging Blue Demon players, who caught the kicking leg and were called for roughing the punter.

With a first down at the 30, Alexander found Isaiah Smith for a 70-yard touchdown pass to boost the score to 28-7.

Albia went three and out and punted to the EBF 48. Alexander really hadn’t looked for speedster Kalen Walker throughout the game and when he did pass to him, Luke Bossard dropped him for a four-yard loss. On a third and 12, Alexander found Walker streaking past the Albia secondary and hit him for a 42-yard touchdown pass making the score 35-7 with 8:09 left.

Albia wasn’t about to cash it in. Chance hit Stewart for 15 and Bossard for nine before threading the needle to Stewart who ran 66 yards for the score. Fisher’s kick was good and Albia trailed 35-13.

Flattery sacked Alexander, then Alexander fumbled and lost another seven setting up a punt. Albia took over at the 20, Chance found Stewart for 11 to the 31, but threw an interception to Smith to effectively end the game.