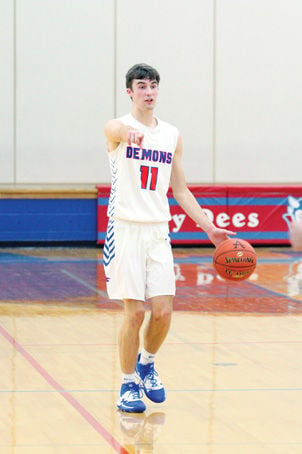 Blake Chance sets up the offense in Tuesday’s game at home against Washington. 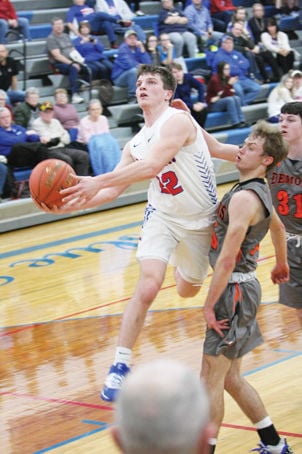 Nate Wynn glides in for a layup against Washington. 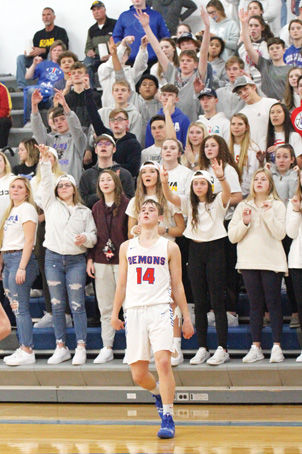 Blake Chance sets up the offense in Tuesday’s game at home against Washington.

Nate Wynn glides in for a layup against Washington.

The Albia Blue Demons ended up on the losing end of the scoreboard for the first time this season as they dropped a 63-50 decision to the Washington Demons on Tuesday night in Albia.

The first quarter was an evenly played period with Albia getting three point goals from Blake Chance, Brayden Messamaker, and Joe Teno while Washington hit two from outside the arc and added six points on drives into the lane. Washington took the lead in the final minute of the period 14-12.

Albia outscored the Demons 6-2 to begin the second quarter with Messamaker hitting two from beyond the arc but they managed only six more points in the half while Washington ran their way to a 31-26 halftime advantage.

The Blue Demon offense caught fire early in the third quarter as Messamaker hit two more three point goals and Nate Wynn was able to score from inside the painted area, but Washington kept pace with five free throws and five field goals to maintain a 46-42 lead into the final eight minutes of the contest.

Former Arizona Wildcats DC Marcel Yates gets a new job, and it's in the Pac-12

The Blue Demons were within range at the five minute mark down 52-49 but failed to score again, missing several shots inside until the final seconds, while Washington added 11 points to their total hitting nine free throws down the stretch to secure the victory.

Messamaker led the team in scoring with 15 points, Chance and Wynn each had nine, Jackson Pence had eight, Teno three, while Jackson DeMoss, Drew Chance, and Trey Griffin each had two. Other statistics are unavailable at this time.

Albia falls to 7-1 on the season. The scheduled game at Knoxville was postponed due to the impending weather.