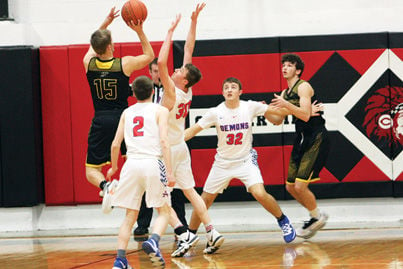 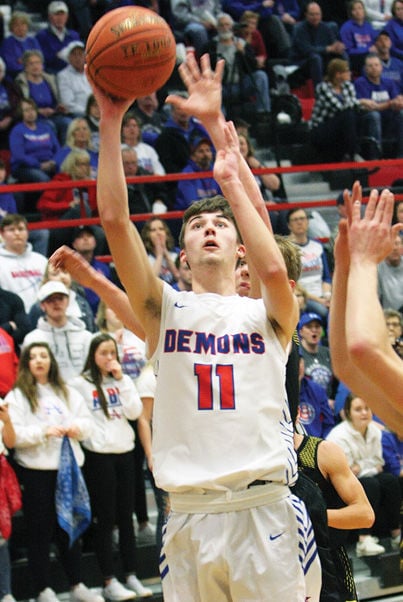 Calm and collected, junior point guard Blake Chance drives inside for two points against the Rockets. 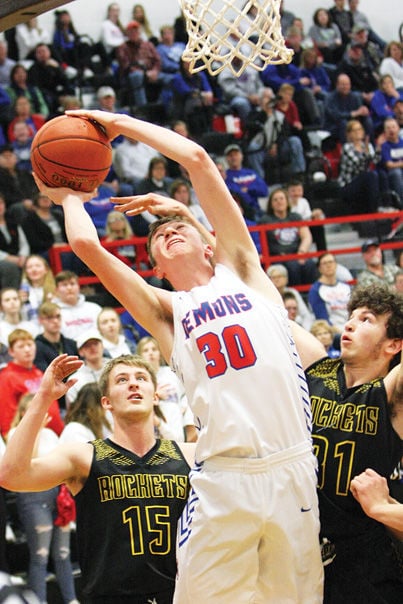 Albia senior forward Joe Teno gets a Rocket haircut from Ethan Davis, going inside for a shot. 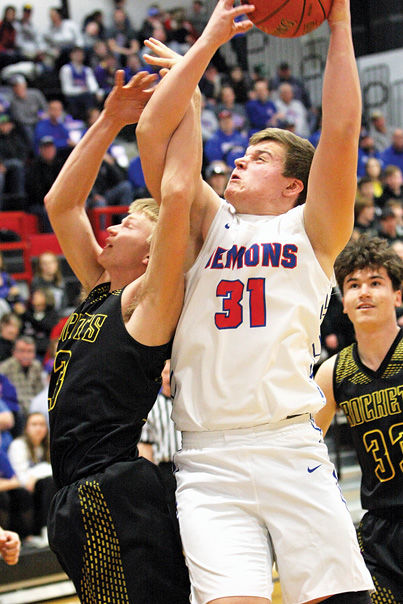 Just one of many great defensive moments, Jackson Pence yanks a rebound away from Aiden Yates. 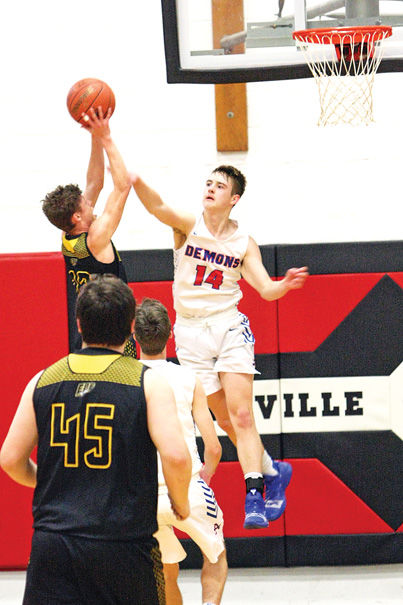 Calm and collected, junior point guard Blake Chance drives inside for two points against the Rockets.

Albia senior forward Joe Teno gets a Rocket haircut from Ethan Davis, going inside for a shot.

Just one of many great defensive moments, Jackson Pence yanks a rebound away from Aiden Yates.

The Albia Blue Demons used a stingy defense and a fast paced offense to take one more step down the post season road on Tuesday night as they defeated the EBF Rockets 72-51 in Centerville to capture the District 11 Championship. The 21-point margin of victory really wasn’t that close.

“We had a great first half especially on defense,” said Coach Kevin Archer. “We really focused on stopping the interior pass and also we contested the three point line as well.”

Having witnessed the Rocket defense, led by Kalen Walker, create total chaos on the court in a win against Chariton in the district semi-final, Coach Archer started a much smaller, quicker line-up to create a controlled, up-tempo offense and a super quick defense. It worked from the opening tip.

Blake Chance got it started by dropping a shot from outside the arc and later added a field goal to put Albia in the lead and that lasted throughout the game. Drew Chance added a pair of points and Brayden Messamaker scored on drives to the rim twice while Albia built a 16-7 advantage in the first quarter. The chest to chest defense that Walker had applied to Jackson Curnutte on Tuesday didn’t work on Blake Chance as Chance looked to pass first and eviscerated the Rockets’ interior with his passing.

Drew Chance scored the opening point in the second quarter grabbing an offensive rebound and got fouled on the putback attempt. The Rockets’ Walker drove to the rim for the first points by EBF at the 6:09 mark, but that would be the last points for the Rockets until Jared McCrea scored with 1:51 left in the half. Between EBF scores, Albia managed to move the scored board to 24 as Messamaker hit a three point goal, Blake Chance scored on a drive and later hit two free throws to put Albia up 24-9. In the final minutes Joe Teno hit a three, Nate Wynn scored on an offensive rebound. As the buzzer to end the half Albia was up 29-13.

“We were all dialed in during the first half both offensively and defensively,” said Coach Archer. “Everyone on the court played a solid game and really some played the best minutes of the season.”

After being a ‘clean-up crew guy’ with Packers, Blake Martinez excited for fresh start in New York

Spring snapshot: What comes after seniors Miller and Honas at inside linebacker?

Some great minutes were to come in the second half as well. The game pace became nearly frantic as EBF went to a full court man defense. The Rockets were able to exploit the open court getting the ball to Ethan Davis for eight points and Isaiah Smith for eight as well. Albia was able to adjust and took care of the ball and attacked the basket on every possession scoring 32 points in the period. “Drew Chance may have benefited most from our aggressiveness,” said Coach Archer. “He had eight points in the quarter off a drive and dish to him at the block.”

Jackson DeMoss scored eight points on run out layups, Messamaker hit a three and a two point goal, Wynn scored on a run out and Blake Chance had two drives to the rim for scores. The result was a 61-30 margin to start the fourth quarter.

EBF outscored Albia 21-11 in the fourth quarter but never made a big enough dent in the margin and both teams substituted at the two-minute mark.

The Blue Demons improve to 18-3 on the season and advance to the substate final to play Woodward-Granger on Saturday.