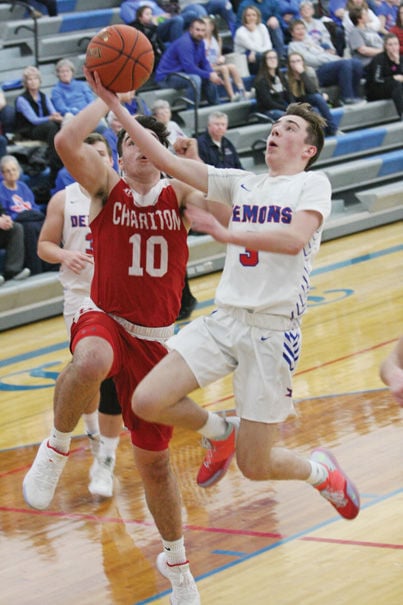 Trey Griffin drives in for a lay-up against the Chargers. 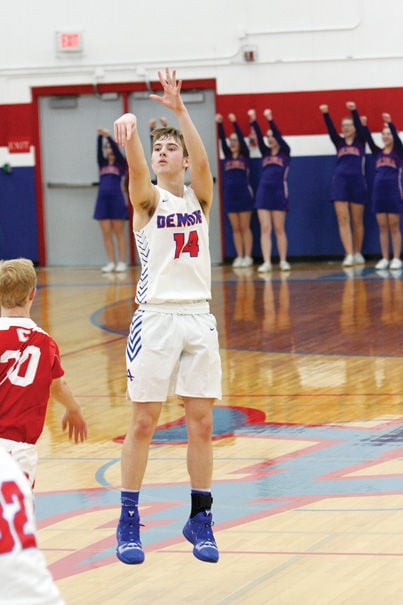 Back from a two-game absence with an ankle injury, Brayden Messamaker went off for 17 points against Chariton to lead the Blue Demons.

Trey Griffin drives in for a lay-up against the Chargers.

Back from a two-game absence with an ankle injury, Brayden Messamaker went off for 17 points against Chariton to lead the Blue Demons.

The Albia Blue Demons used the Chance to Chance connection to outlast the Chariton Chargers 65-53 on Thursday night in Albia.

The Blue Demons took a 7-2 lead at the 5:53 mark after Brayden Messamaker hit a three-point goal. Blake Chance was dealing out assists throughout the period while scoring two points on his own. After a Chariton time out, the Chargers started to go inside to score and at the 51 second mark they took their first lead, 11-10. Blake Chance scored twice in the final 20 seconds of the period to give Albia a 14-11 advantage.

The Blue Demons switched to a zone defense to choke off the inside play of the Chargers and outscored Chariton 9-4 in the first three minutes of the second quarter as Messamaker hit three in a row from outside the arc. Chariton hit a three-point goal at the 2:14 mark which cut a 27-19 lead to only five points. Albia allowed only two free throws in the final minutes while Nate Wynn hit two free throws, Trey Griffin added one and Blake Chance made a steal and scored, then added a free throw. Jackson Pence hit a free throw with four seconds left in the half to increase the margin to 33-24 at the half.

The Chargers came out of the locker room ready to take control. They hit a three-point goal to begin the half and three minutes into the half Chariton hit their second shot from outside the arc to cut the margin to 37-35. Albia maintained the lead with offensive rebounds and scores from Wynn and Joe Teno but at the 2:38 mark the Chargers dropped two free throws to go up 42-41. This is about the time Blake Chance began to find Drew Chance in the painted area. Drew Chance scored the final four points of the quarter to give the Blue Demons a 45-42 advantage going into the final eight minutes.

Messamaker led the team in scoring with 17 points while Blake Chance scored 14, Teno had 13 and Drew Chance had 10, all in the second half. Nate Wynn had eight points, Jackson Pence two, and Trey Griffin one. Blake Chance had 12 assists. Wynn, Blake Stewart, and Teno each had one assist.

Albia improves to 10-1 on the season and 7-0 in the SCC. They travel to Centerville on Tuesday and to Osceola to face Clarke County on Friday.