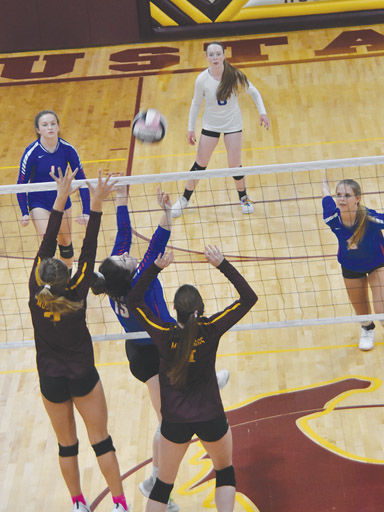 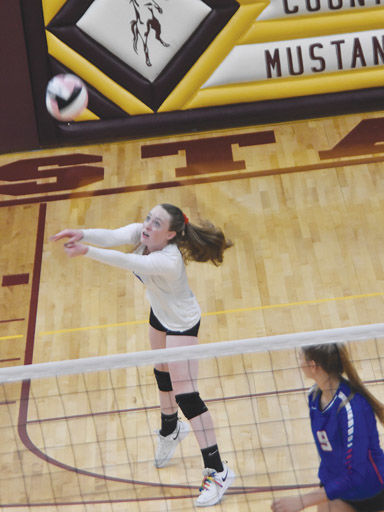 ASHLEY BEARY, in her first game filling in for injured libero Abbie Martin, stops an attack and passes the ball to the net.

ASHLEY BEARY, in her first game filling in for injured libero Abbie Martin, stops an attack and passes the ball to the net.

With senior libero Abbie Martin on the bench nursing an ankle sprain and an all new line-up facing a very good Davis County team on the road, it took the Albia Lady Dee varsity a bit to find their groove. But once they did, it was a dominating performance over the Lady Mustangs.

The team started slowly with freshman Ashley Beary in the libero spot and freshmen Sophie Waber and Emma Wenger seeing considerable court time. Albia committed a number of unforced errors in the set, trailing 17-10 at one point.

But behind the veteran play of Abbey Griffin, Ellie Spurgin and Alex Beard, along with sophomores Jenna Gronewold and Tanae Thiravong, the Dees found their stride. They cut the lead to 23-21, tied it at 23-23 and served out the final two points for the first set victory.

In the second set, Griffin dominated at the net with numerous kills off sets by Beard. Spurgin also put several sets on the floor. Albia’s pressure caused Davis County to make numerous unforced errors with several kill attempts going into the net instead of over it. The Mustangs never really threatened, losing 25-15.

The third set was very competitive as the Mustangs rallied.

Spurgin had another kill and Griffin dinked the ball for a kill before Beary ace served off a Davis County back row player’s head to give Albia a 12-8 lead and force a Mustang timeout.

Spurgin and Griffin followed with kills to up the lead to 15-8 before Davis County rallied with a kill, a block on a Griffin kill attempt, another block and a set that went awry. But two Griffin kills, a kill by Gronewold and an ace serve by #6 gave Albia a 20-15 lead. In the final five points, Spurgin had a kill, Griffin two, including one from the back row, Beard had a nifty reverse set and Davis County had an unforced error.

Ashley Beary was 19-20 serving with an ace and had nine digs. Emma Wenger was 12-12 serving, had an assist and eight digs. Sophie Waber had two assists and a dig. Tanae Thiravong had six attacks and a dig.

The Dees move to 18-4 on the season and play again at Chariton on Tuesday. The Dees are 42-11 in set play this season.