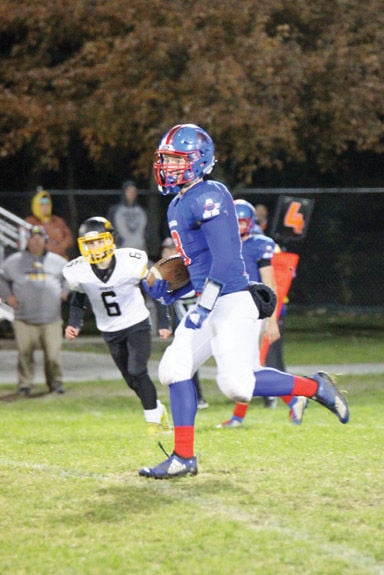 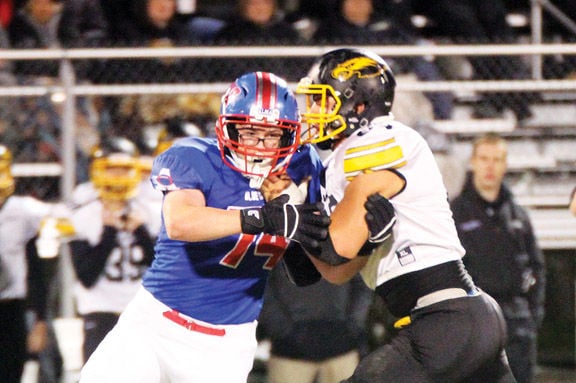 There’s not much to say. The Albia football team completed a frustrating 1-8 season with a 77-7 loss to Mid-Prairie of Wellman. The Golden Hawks racked up 540 yards of rushing offense, scoring at will against an overmatched defensive line.

Mid-Prairie brought a small college-sized offensive line to Ironman Field and pushed Albia back about five yards every snap.

Albia picked up about 250 yards of passing offense, but four interceptions unraveled any offensive consistency. Blake Chance completed 10 of 29 passes for 160 yards, but connected with just two receivers. Blake Stewart had four catches for 66 yards and the team’s first touchdown and Nathaniel Wynn had six catches for 94 yards.

Zach Schwarte gave the home fans their biggest thrill of the night with a 68-yard run. Outside of that, the Blue Demons had just 13 yards of rushing offense.

Albia punted on its first series and Mid-Prairie gained 17 and 33 yards to the 22 where Kayden Reiners scored. The PAT kick failed and Albia trailed 6-0 at the 9:38 mark.

Blake Chance threw an interception on the first play from scrimmage, Mid-Prairie started at the 46, gained 12 and 32 yards behind Reinners and scored from the two with 8:14 left in the quarter. The pass was good and Albia trailed 14-0.

Chance hit Nate Wynn for 10 to the 44 to start the next possession, but three incompletions forced a punt. Mid-Prairie had gains of 9, 4, 7, 14, 8 and scored from the 22 on a pass from Brad Tornow to Chris Miller to boost the score to 21-0.

The Blue Demons came out and had a solid offensive effort on its next drive with Luke Bossard gaining four, Blake Stewart catching an 11-yard pass, Nate Wynn catching a ball for six, Wynn again for 30 to the Mid-Prairie 20 and a pass interference call set up a first and goal at the 10. Chance threaded a perfect pass to Stewart for the score. David Fisher added the kick and the score was 21-7 with 1:22 left in the quarter.

Two bad things happened on the next possession. Sophomore center Zach Jones reinjured his back and would not return and on third down at the 47, Chance threw another interception. Using junior Vinny Bowlin as the featured back, Mid-Prairie moved to the one and scored with 6:36 left. The pass failed and the score was 33-7.

Albia went three and out, punted, but Mid-Prairie fumbled and Albia recovered at the 23. A grounding penalty and a punt snap over Wynn’s head gave Mid-Prairie a safety and a 35-7 lead with 4:48 left.

Albia’s passing offense came to life with a 38-yard completion from Chance to Stewart and a 10-yard completion to Wynn got the ball to the 19, but another Chance interception in the endzone brought the ball back to the 20. On the first play from scrimmage Bowlin raced 80 yards for the score to make it 49-7 with 1:08 left.

Mid-Prairie took the third quarter kickoff and made lots of mistakes, including a facemask penalty that wiped out a 40-yard run and punted to the Albia 20.

Chance connected with Wynn for a 38-yard completion, but three plays later Albia punted to the Golden Hawk eight. With 3:03 left, Reiners took the handoff and raced 92 yards for the score to make it 56-7.

Chance threw his fourth interception and Bowlin took a handoff and scored from 30 yards out to make it 63-7.

Albia fumbled to end the third quarter, giving Mid-Prairie the ball on the 11 and Nathan Quinby scored a play later to make it 70-7. Quinby would score once more to make the score 77-7.

“I’d like to thank our seniors for their commitment to the program,” said Coach Justin Huber.

Coach Scott Farrington added, “We hope our guys learned things they will take into their lives. The game is more than just wins and losses. They’ve made friendships that will last a lifetime.”

Williamsburg is the only District 6 team to make the playoffs.