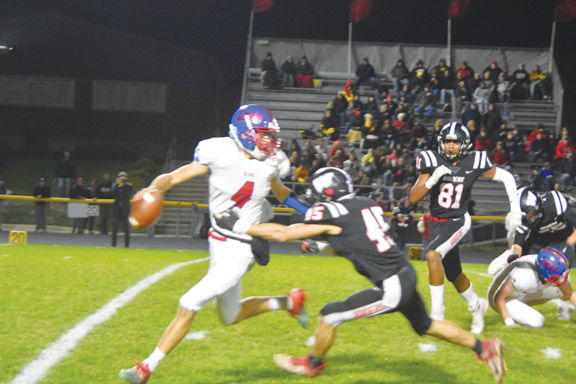 Riley Holt made life miserable in the second half for Albia quarterback Blake Chance. Holt had two sacks, blitzing through a patchwork Albia offensive line. 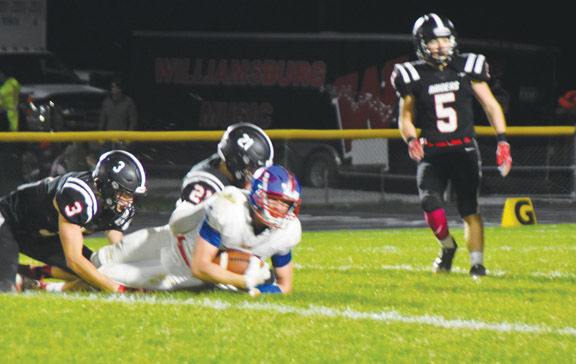 Luke Bossard is brought down after a nine-yard gain. 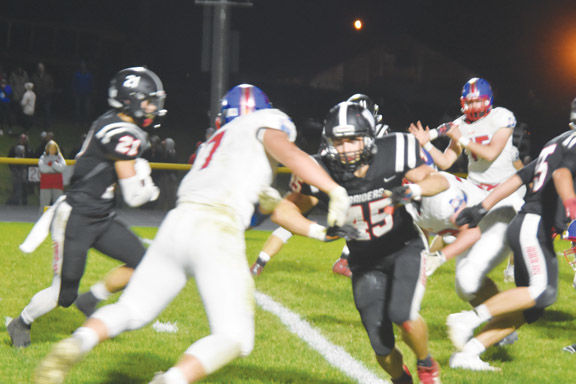 Jackson Pence forces Kaden Wetjen inside as he goes up against fullback Riley Holt. 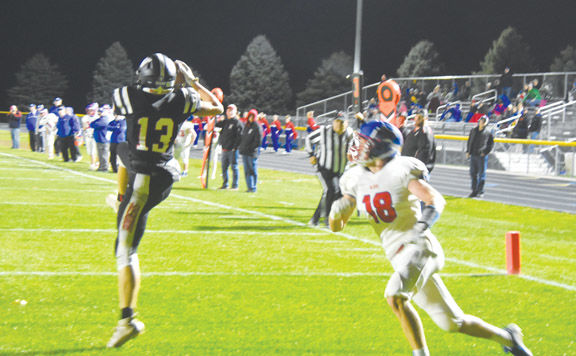 After a picture perfect drive to the Williamsburg 10, Albia quarterback Blake Chance needed another second for Nate Wynn to clear and instead threw an interception.

Riley Holt made life miserable in the second half for Albia quarterback Blake Chance. Holt had two sacks, blitzing through a patchwork Albia offensive line.

Luke Bossard is brought down after a nine-yard gain.

Jackson Pence forces Kaden Wetjen inside as he goes up against fullback Riley Holt.

After a picture perfect drive to the Williamsburg 10, Albia quarterback Blake Chance needed another second for Nate Wynn to clear and instead threw an interception.

What could have gone wrong, did go wrong for Albia against a fine Williamsburg team on Friday. From missed blocking assignments, to dropped touchdown passes, to interceptions, lost fumbles and poor tackling, the Raiders of Williamsburg rolled over the Blue Demons 68-7.

The Raiders really didn’t need much help with one of the fastest teams Albia has seen this year and for the past couple of years. Led by champion sprinter Kaden Wetjen, not only the backfield, but a lean, quick defensive line, created mismatches for Albia at every position.

“They were extremely fast,” said Coach Scott Farrington on the Saturday morning coach’s corner. “If we didn’t come up and hit them before they broke through the line, they were gone.”

Wetjen scored the first touchdown after an attempted onside kick that didn’t go the distance. Starting at the 38, Wetjen broke through the line, cutback and raced 38 yards for the score.

Albia had an excellent drive on their first possession with Blake Chance hitting Liam Winfield for six and Nate Wynn for 18. A pass interference penalty gave Albia a first down at the Williamsburg 24, but Chance’s pass was intercepted and returned to the Albia 28.

From there, Levi Weldon completed an eight-yard pass, then kept the ball on another cutback play to score with 9:00 left in the first quarter. The kick failed and Williamsburg led 13-0.

The teams exchanged punts, then Albia punted with 5:23 left and Wetjen almost broke it with a punt return of 34 yards to the 48. Wetjen ran for 32, then Austin Burns scored from 15 yards out to make the score 20-0 with 4:09 left.

Much like they did against Davis County, the Blue Demon offense rallied with Nick Heffron catching a pass for 18, Luke Bossard running for four, Wynn picking up a first down with an eight-yard catch and then Chance finding Bossard looping out of the backfield for 12 yards to the 24 of Williamsburg. On first down, Chance threaded the needle to Wynn for the score. David Fisher’s kick made it 20-7 with 1:07 left in the quarter.

Williamsburg took over at the 35, Burns ran 46 yards to the two and Wetjen scored on the first play of the second quarter.

Trailing 26-7, Albia rallied again with Chance finding Bossard, who had all kinds of yards after catch, running for 41 yards to the Raider 35. On third and 10, Chance finally found Blake Chance for 17 to the 18, rifled another pass to Stewart as he crossed the endzone, but the surehanded junior receiver dropped the ball. Chance scrambled for eight to the 10 and on third and two, threw an interception in the endzone.

Wetjen took the handoff on the Raiders first play from scrimmage and raced 80 yards for the score. With 9:00 left, Albia trailed 34-7.

The Blue Demons continued to rack up yardage with Wynn running for six and then catching a 14-yard pass from Chance. Jackson Pence caught a nine-yard pass to the 44, but the drive bogged down and Stewart was unable to hang on to a Chance pass on fourth down.

Albia’s defense put up a pretty good fight on the next set of downs, forcing a fourth and three at the 20 that the Raiders converted with a 15-yard run by Wetjen. He scored two plays later to boost the score to 41-7.

The next few drives were dominated by blitzing linebacker Riley Holt. He dropped Chance for an 11-yard loss and Albia punted with 2:53 left. Holt ran for 14, then Weldon completed a 20-yard touchdown pass to Burns to make the score 47-7. Holt sacked Chance again forcing a punt with 23 seconds left and on the first play from scrimmage Wetjen ran 40 yards for the score to make it 54-7.

The third quarter did not start well for Albia, despite a five-yard pass completion to Bossard. The Blue Demons had to give Pence a lineman’s jersey because starting center Zach Jones went out with a leg injury, moving Trey Sample to center. A bad snap lost five and Albia punted.

The Blue Demon defense held Williamsburg to a three and out, but a penalty on the punt gave them a first down. Burns ran for 19 to the Albia 17 and scored on the next play to make the score 61-7 with a running clock.

Wynn caught passes for eight and 15, Stewart got his second catch for nine and then picked up a huge first down at the Williamsburg 15 with a 31-yard catch from Chance.

But Chance was sacked for a 17-yard loss which turned the ball back over to the Raiders. Albia forced a punt and Shawn Good gained nine, but Garin Grinstead threw a pick six which left the score at 68-7.

Despite their problems, the Albia team picked up 235 yards in the air. Second half sacks gave Albia a -6 yards rushing. Williamsburg had 367 yards rushing and another 63 passing for 430 yards.

Chance was 16 for 42 with two interceptions on the night. Wynn led the team in receiving with seven catches for 90, Bossard had three for 57 and Stewart three for 57.

Good led the team on defense with seven, Bossard had six and Sovern three.

“We experienced one of the fastest teams an Albia team has ever faced,” said Coach Justin Huber. “And they had kids playing on the defensive line that were about as fast as their backs.

“It really hurt us to lose Zach Jones at center at the half,” said Coach Huber. Jones suffered a back strain in warm-ups and gutted out the first half before sitting out the second half. “Zach is a real key to our passing blocking and pulling Jackson (Pence) out of our receiving corps to fill in at tackle really made it difficult. Even with that our offense moved. Turnovers hurt us and we dropped a lot of passes.

Coach Huber said Mid-Prairie in Friday’s season home finale is not at all like Williamsburg.

“They’re big up front,” he said. “Everything starts with their defensive and offensive lines. If we can control their pass rush and battle their guys across the line, we can match up with their skilled guys.”