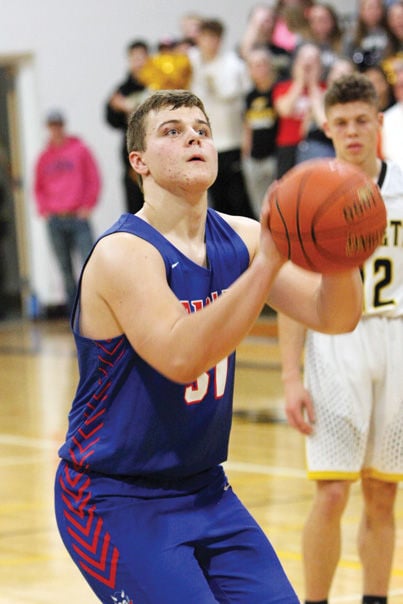 With ice water in his veins, Jackson Pence dropped in two free throws with less than 8 seconds in the game to give Albia the win. 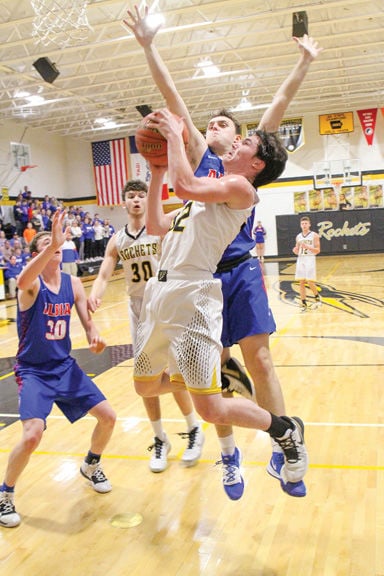 With ice water in his veins, Jackson Pence dropped in two free throws with less than 8 seconds in the game to give Albia the win.

Maybe the barn wasn’t burning but the EBF gym hosted a hot game of basketball on Tuesday night as the Albia boys squared off against the Rockets, who were poised to end the Blue Demons’ undefeated conference record. Two Jackson Pence free throws and a missed last shot decided the battle as Albia survived 53-51.

The Rockets used a pair of three point goals by Kalen Walker and one from outside the arc by Riley Flaig to mount an early lead after Albia had scored the first five points of the game. The Rockets edged into the lead at the four minute mark 9-8 and held Albia to two points for the remainder of the period while building a 19-10 advantage.

Following a field goal by EBF to start the second quarter the Albia defense turned up the heat and limited the Rockets to just one more point for the final seven minutes of the half. Conversely Albia caught fire from deep as Blake Chance hit a pair of three point goals while Joe Teno, Trey Griffin and Liam Winfield each had a three point goals drop to give Albia a 27-22 lead at the half.

The Rockets came out of the locker room focused and scored the first six points of the second half to take a 30-27 lead. Albia tied the game at 30-30 with five minutes remaining in the third quarter. Three ties and two lead changes in the period while Albia’s Joe Teno hit two from deep and EBF’s Isaiah Smith hit two for the Rockets made the tension rise throughout until Albia claimed a 42-39 margin as the final seconds ticked off.

Albia strengthened their lead with a field goal to start the final eight minutes but for more than four minutes the Rockets held Albia to just three points while capturing a 49-47 lead. In the final two minutes Albia tied the game at 49-49 and with two minutes on the clock EBF still owned a 51-49 lead. In the final minute Albia tied the game at 51-51. In overtime Albia was able to secure the ball and ran the clock down for the final shot. Jackson Pence was fouled and hit two free throws to give Albia the Victory.

Albia improves to 8-1 on the season and 6-0 in the SCC. They will host Chariton on Thursday and travel to Centerville on Tuesday.