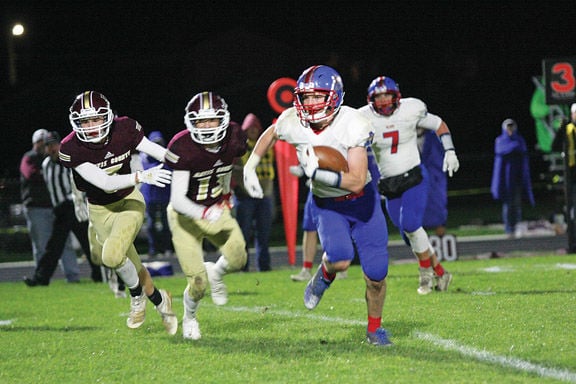 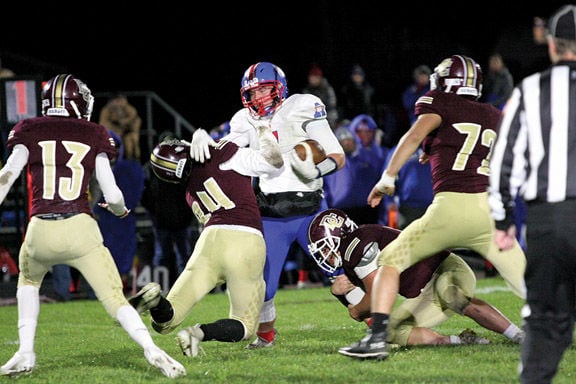 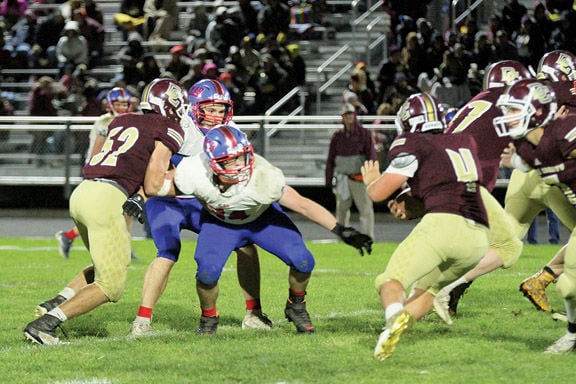 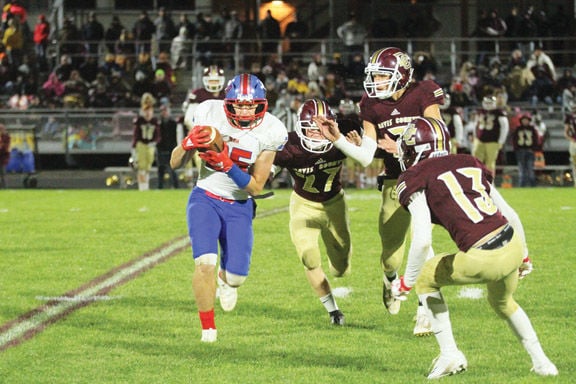 Catch me if you can! Blake Stewart outruns three Davis County defenders after catching one of his 15 passes on the night. (Jesse Simmons photo) 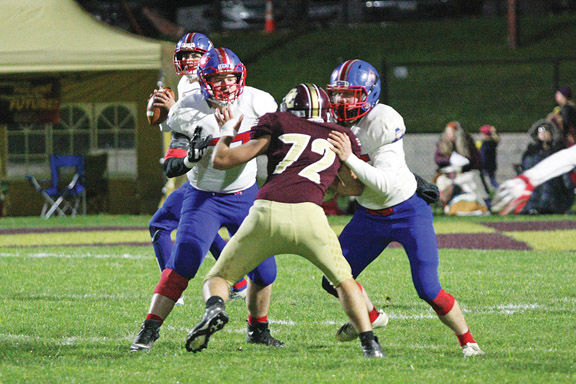 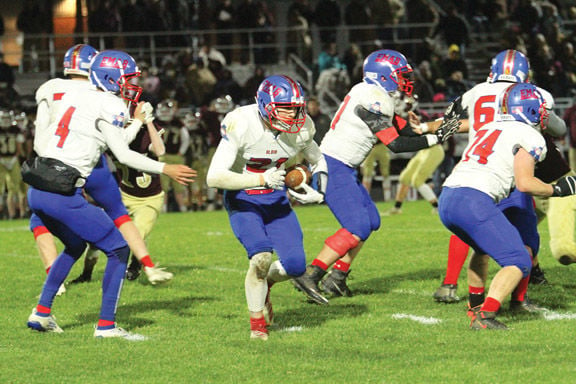 Luke Bossard looks for running room in the first half. (Jesse Simmons photo)

Catch me if you can! Blake Stewart outruns three Davis County defenders after catching one of his 15 passes on the night. (Jesse Simmons photo)

Luke Bossard looks for running room in the first half. (Jesse Simmons photo)

Another bad snap on a punt led to a second Mustang touchdown with 4:01 left in the quarter. A second blocked punt led to Davis County driving to the Albia 13, where the Blue Defense held on a fourth down, but the Mustangs picked off a Blake Chance pass and ran it back for a touchdown, boosting the score to 20-0.

Chance threw another interception on the first play from scrimmage and the Mustangs burned the Albia secondary with a touchdown to make the score 27-0 with 46 seconds left in the first quarter.

Ironically, dropped passes by Albia receivers were a large part of the first quarter mailaise.

Then something happened. An entirely different Albia football team appeared on the field. The offensive line started to pass block. A bevy of Albia receivers led by Blake Stewart and Nate Wynn caught every pass Chance threw up and the race was on to erase an impossible lead.

In the end, the Blue Demons couldn’t find a way to stop sophomore Mustang running back Gavin McCall, who wound up with 259 yards rushing on 25 carries. But the Blue Demons closed the gap to just 10 points in a 59-49 offensive explosion, breaking virtually every single game passing and receiving record along the way.

It was a painful defeat, but you can’t slight the team and its coaches for not laying down after that disastrous first quarter.

“It was painful at every level,” said Coach Justin Huber. “To compound the problems on the field, our headsets and even cell phones wouldn’t work. It was a nightmare.”

But the Blue Demon offense righted itself. “We really didn’t make any adjustments at halftime,” said Coach Huber. “We talked about focus. We talked about how quickly we could score. We reminded them of doing the little things right.”

Chance completed 37 of 51 passes for 385 yards and six touchdowns. His three picks dampened a 163.0 quarterback rating.

Stewart caught 15 passes for 214 yards, including three touchdowns. Wynn had 13 catches for 120 yards and two scores. Luke Bossard had five catches for 31 yards and a score. Nick Heffron had two for nine and Jackson Pence and Damon Sovern also caught passes for eight and three.

If you like offensive football, you loved Friday’s game, despite the bitter cold. Defensively, the Blue Demons couldn’t make the adjustments necessary on a cutback play that let sophomore Gavin McCall rush for 259 yards and Clayton Smith added another 62. “We were on our heels a lot of the night,” said Coach Huber. “Our guys needed to come up and meet McCall before he made the cut back and we just didn’t get that done. Our pass defense was really spotty. The rainbow passes they caught for touchdowns should have been knocked down.”

Chance faced a third and six on the first play of the second quarter and found Wynn for 22 yards. Bossard ran for two, Chance scrambled for three, then hit Bossard for an 11-yard gain to the Mustang 24. On the next play, Chance saw an opening and sprinted in for the score. David Fisher added the kick to make it 27-7 with 10:30 left in the half.

McCall took the first handoff on Davis County’s next possession and ran 47 yards to the Albia 27. Albia’s defense stiffened and on fourth down, Carson Maeder threw a rainbow into the endzone that was caught to give Davis County a 34-7 lead.

The Blue Demon offense sputtered because of a holding call on what could have been a 13-yard pass to Stewart, punted and Wynn was roughed, giving Albia a first down at the 31. From there, Chance hit Stewart for 16, Wynn for six, Stewart for three, Pence for eight, Wynn for 27 to the four and Wynn caught a touchdown pass with 2:11 left in the half. Fisher’s kick made it 34-14.

Albia still had no answer for the sophomore fireplug McCall, who ran for 19 and 16 to the Albia 27. After a holding call, the Mustangs gained 15 on a pass, Maeder scrambled for 10 and a first and goal at the five and threw to Clayton Smith for the score with 10 seconds left in the half to make it 40-14.

Second half was all offense, some better defense

A better defensive team arrived on the field along with a sensational offensive unit. Davis County recovered a muffed kick at the Albia 43, McCall gained 20 to the Albia 23, but the Blue Demons held McCall to three and zero, stopped a pass for no gain and Sovern batted down a pass to give Albia the ball at the 19.

Chance went to work, throwing out of the pocket and rolling away from the Mustang rush, hitting Bossard for eight, Wynn for eight, Stewart for 14 and Sovern for three before throwing his third pick of the night at the Mustang 45 with 6:33 left.

Albia’s defense rose up again, giving up a first down on runs by Smith, but forcing a fumble (recovered by Davis County) and breaking up a pass to force a punt.

Davis County rolled through the quarter behind runs of six, 10 and seven by McCall and then a personal foul against Albia set up a first down at the 17. McCall would run 15 yards for the score to make it 48-21 with 10:49 left.

Davis County came back starting at the 38 with runs of six, nine and seven by McCall and on second and six, Wynn intercepted and raced 65 yards to the Mustang eight, where Chance made a wild scramble and hit Stewart for the touchdown, cutting the lead to 47-35 with 5:43 left.

Davis County got the ball at the 46, McCall ran for nine and five, then Smith scampered 40 yards to boost the score to 59-42 with 1:07 left. The PAT kick failed.

There was no calling off the offensive dogs. Starting at the Albia 35, Chance hit Wynn for eight, threw 44 yards to Stewart to get the ball to the 13, hit Heffron for 12 to the one and found Wynn open for the touchdown. Fisher’s final PAT made it 59-49. Davis County recovered the onside kick and the game was over.

Albia travels to Williamsburg on Friday.