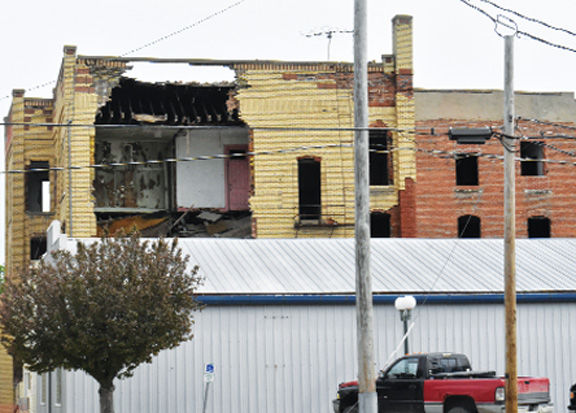 A 3 ½ inch rain Thursday evening into Friday morning caused the collapse of the south and west side of the Clark Hotel, leading to the full scale demolition of the 122-year-old building. 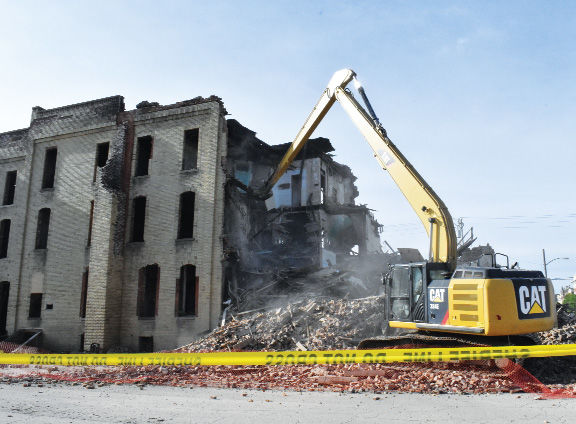 As the exterior bricks fell away from the main structure of the building, back hoe operator Brian Pollmiller would go inside and drag down the interior wood part of the building.

A 3 ½ inch rain Thursday evening into Friday morning caused the collapse of the south and west side of the Clark Hotel, leading to the full scale demolition of the 122-year-old building.

As the exterior bricks fell away from the main structure of the building, back hoe operator Brian Pollmiller would go inside and drag down the interior wood part of the building.

A large section of the south side of the three-story portion of the Clark Hotel collapsed around 4 a.m. Friday morning after a 3 ½ inch rain compromised the already rickety building. The collapse was caught on a security camera on Conley’s Spray Foam building a block away.

Almost miraculously, the building did not fall on the one-story south addition to the hotel that has been threatening the Mick Furniture warehouse. Apparently the first floor above the collapse had already fallen into the basement and bricks and sticks fell straight down.

Albia Councilman Dennis Conley alerted Mayor Richard Clark and the two met with City Clerk Linda Heller, City Attorney Bob Breckenridge, a representative from ADLM and Dave Mick. They were joined by Michael Lathrop, the only contractor interested in tackling the mess.

“It was a pretty desperate situation on Friday,” Conley told fellow council members Monday night. “There was very little holding the building up.”

Having fussed over the old hotel for nearly a decade, it was evident to all that the rainstorm had forced the mayor’s hand. Mayor Clark declared an emergency and by 9 a.m. Lathrop Construction (the company that had successfully brought down the old law enforcement building) Dean, Michael and Chad Lathrop, along with Ray Mahon, were on the job.

At first they thought of moving in a crane they knew was available in Ottumwa. Then Michael thought of an old demolition friend from Davenport, Brian Pollmiller. They called him, decided to use their own tall back hoe and shorter back hoe and by late afternoon were placing a cable around the old restaurant building on the south side (the building that was threatening the Mick warehouse but did not move when the main hotel collapsed directly over it).

They also called in Musco Lighting from Oskaloosa to illuminate the collapsed part of the building. Starting at 9 p.m., they worked until 1 a.m. Saturday, dragging down the part of the hotel that had collapsed.

Back at it at 8 a.m. Saturday, with the Albia Fire Department on hand to keep dust under control, they had the building dropped by around noon, just under 30 hours after they were first called in.

“It was a remarkable job,” said Mayor Clark at Monday’s Albia City Council meeting. “I have no idea of the cost. Once we got it to the ground, then the rubble became a safety issue and we wanted Lathrops to get it gone as soon as possible.”

Monday they began the task of separating bricks (being hauled one direction) and plaster and lumber (headed to the landfill). Michael Lathrop thought it would take most of the week to haul away the debris.

SpaceX has a 50% chance of launch today

Storror, the parkour collective that doesn't let coronavirus stop them

Ironically, the Clark Hotel as it lived on in the minds of the Albia City Council had some similarities with the famous Eagles hit “Hotel California.”

Okay, that line has nothing to do with the Clark Hotel, at least in the past 40 years or so.

The costly situation started with the sale of the hotel for one dollar to an Ottumwa investor who stripped the hotel of everything of value (mostly copper) and walked away. That led to tax sales, a $37,000 bill to the citizens of Albia for asbestos removal, condemnation costs and now this. It is a bill that will likely cost between $300,000 and $500,000 when it is all said and done.

And ownership may still be in question.

The hotel business in Albia started with George P. Cramer, a circus owner, who built his Cramer House Hotel in 1869 on the current site. It burned in 1883 and he rebuilt the New Cramer House, the elegant three-story Italianate brick structure that just came down. He sold it in 1884 and it became the New Monroe Hotel with a restaurant, a tea room (later a bar) in the basement level and a ball room. It became a main stop for salesmen traveling by train and an east addition was built to hold sample rooms for salesmen. It was sold by a Mr. Stevenson to a Mr. Clark in the 1920s.

If you compare the original 1898 photo with darker bricks and the building as it appeared in the 1930’s, you can see the large chimney that was added for “modern” heating. You can also see significant changes to the magnificent copper canopied west front entrance of the building and the Victorian style (Italianate) top replaced with an Art Deco roofline that dominated architecture in the 1920s and 1930s. Clark also added the yellow brick veneer.

Eventually, a restaurant was built on the south side of the building with the Frontier Lounge in the basement. Hotel rooms were converted to apartments sometime after WWII.

The Albia Interurban Railroad also passed by the west side of the hotel.