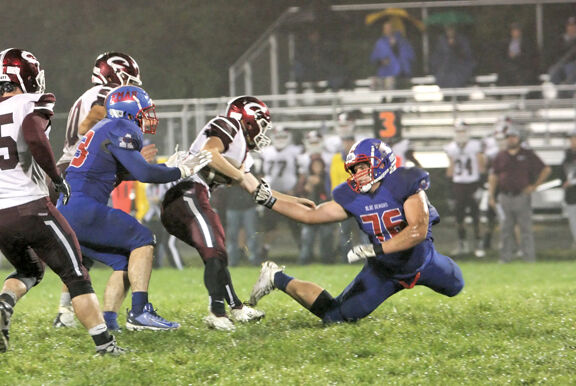 Camden O’Brien and Jackson Pence work together to bring down a Clarke runner. 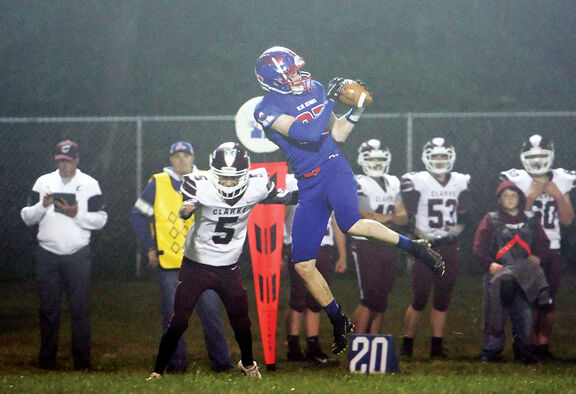 Nick Heffron goes up for a Blake Chance pass that he turned into a gain of 48 yards. (Terry Simmons photo) 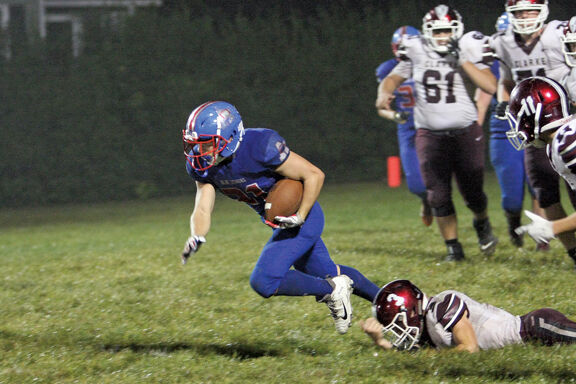 A Clarke defender catches Gage Oddo’s heel preventing the junior half back from a big gain. 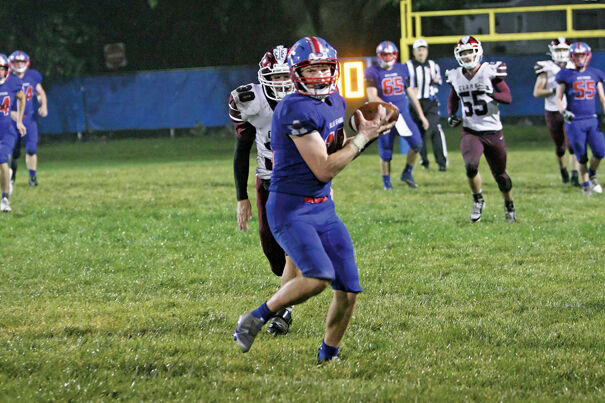 Nate Wynn snares a Blake Chance pass and heads down the sideline. Wynn had five catches for 76 yards and a touchdown. Terry Simmons photo. 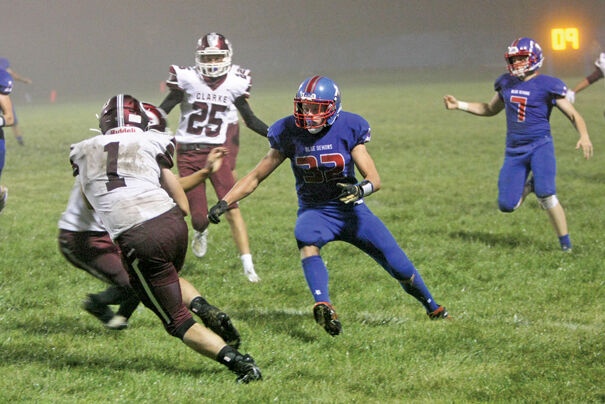 Landon Simpson leans in for a tackle.

Camden O’Brien and Jackson Pence work together to bring down a Clarke runner.

Nick Heffron goes up for a Blake Chance pass that he turned into a gain of 48 yards. (Terry Simmons photo)

A Clarke defender catches Gage Oddo’s heel preventing the junior half back from a big gain.

Nate Wynn snares a Blake Chance pass and heads down the sideline. Wynn had five catches for 76 yards and a touchdown. Terry Simmons photo.

Landon Simpson leans in for a tackle.

With 5 ½ inches of rain soaking Ironman Field and a thick fog shrouding the stadium the first three quarters, it’s remarkable anybody scored. But the Albia Blue Demon football team came up with three touchdowns in the first half to pick up their first win of the season, 22-0 over Clarke.

The score really doesn’t reflect Albia’s dominance over the Indians. The Blue Demons had the ball at the Clarke 16 midway through the first quarter and couldn’t score, they moved to the 15 with eight minutes to go in the half without a score and in the third quarter had a touchdown pass from Blake Chance to Nate Wynn called back on an ineligible lineman downfield penalty. Another long pass from Chance to Wynn in the fourth quarter was called back on a penalty.

“We couldn’t run like we wanted, but our running still opened up the pass,” said Coach Justin Huber. “Blake (Chance) did a nice job getting the ball to a lot of guys.”

Albia’s offense moved efficiently throughout most of the game, but running became a challenge in the second half as the field became extremely slippery. It was defense that really shined, pitching Albia’s first shutout in about five years. Albia’s linebackers were aggressive in pursuit and the Blue Demon backfield, embarrassed in last week’s loss to Davis County, played almost perfectly against a decent Clarke passing attack.

“Our defense really stepped up,” said Coach Huber. “Our line and linebackers were really active flowing to the ball and gang tackling and the changes we made in the backfield paid off.”

The coaching staff moved Nick Heffron to safety along with Austin Stanley, and had Damon Sovern, Chris Kilfoyle and David Fisher at the corners.

Clarke’s inability to hold onto the ball played a big part in their loss. Clarke fumbled four times and lost two, and gave up two interceptions.

Because of the weather, nobody on either side of the field really ran the ball well, other than Osten Blevins of Clarke, a diminutive 5’8” 142-pound junior who sparked Clarke’s only real threat in the third quarter with runs of 22, and 25. The Indians had the ball at the five-yard-line after a facemask penalty, but fumbled on a first and goal.

On the other hand, Albia’s passing game was sensational, particularly when you consider almost 80 yards of passing, including a touchdown were called back on penalties.

The field was in remarkably good shape with the 5 ½ inches of rain that had fallen during the week, but the steady drizzle and fog made the footing difficult. Albia took the ball first, moved to the 46 and appeared to have picked up the first down in Clarke territory, but officials ruled a diving catch by Stewart was incomplete and Albia punted.

The Blue Demons used passes of 14 and 13 from Chance to Stewart to get to the 11 of Clarke, but a penalty and two incomplete passes turned the ball back with 4:33 left in the quarter.

Robert Robbins says he wanted fans at Pac-12 events but Calif. schools 'just couldn't do it'

Five storylines to watch as Wyoming goes through fall camp

Clarke ran two plays and fumbled, losing 11 yards to their own nine and had a booming punt to the Albia 39. Albia had a solid 14-play drive ending the first quarter and getting to the 8:14 mark of the second. Chance completed passes to Wynn for 10 yards and to Heffron for 14 while Oddo picked up gains of nine and seven to the Clarke nine. But another penalty and an incomplete pass on fourth down gave the Indians the ball back.

Clarke ran two plays and fumbled with Camden O’Brien covering the ball at the 26.

On first down, Chance hit Stewart in stride for the game’s first score. David Fisher’s kick was paratially blocked and Albia led 6-0 with 6:46 remaining in the half.

Clarke managed their first first down despite a great tackle by Liam Winfield for a three-yard loss. Clarke tried passing on third and 18 and it was nearly picked off by Chaz Fee, forcing another punt.

Albia took over at the 37 with 3:40 left in the half. Chance hit sophomore tightend Simpson for nine yards, then threw what appeared to be a 53-yard touchdown pass to Stewart after a cross field scramble, but the touchdown was negated by a lineman downfield penalty.

Flattery caught a six-yard pass and Albia got 15 more for a roughing call, then Chance hit Wynn for 25 to the 12. On second and 12, Chance found Winfield on a crossing pattern for Albia’s second score. Chance passed to Stewart for the two-point conversion and Albia led 14-0 with 1:16 left.

The Indian’s offense continued to struggle. A fumble set up a fourth and 12 and the punt landed at the Albia 44.

Chance immediately went to the air, hitting Wynn for 34 yards to the 10. After two incompletions, he hit Heffron for a 10-yard touchdown pass as the clock ran out. Chance passed to Flattery for the two-point conversion and the Blue Demons took a 22-0 lead into the half.

The Blue Demons had their chances to score in the second half, but field conditions played a part in stalling the offense. Albia’s defense continued to play aggressively. Jackson Pence knocked down a pass to force a punt on the first Clarke possession, but Albia went three and out and punted.

Albia went three and out and punted with 2:49 left in the quarter. O’Brien and Pence shared a sack on the quarterback as the quarter ended with a Clarke punt. Chance came out with the first play of the fourth quarter and hit Wynn in stride for what looked like a 33-yard gain, but it came back on an ineligible receiver penalty and Albia punted from the 13.

Clarke punted with 11:15 left and Chance found Wynn for a 12-yard gain and a first down but the drive fizzled and Albia punted with 5:57 left. Clarke went three and out and punted and with Grinstead behind Center, Albia moved from their own seven to the 15 on a 12-yard run by Oddo, but Grinstead was forced to punt.

Clarke picked up their only passing first down with a 19-yard completion, but gave the ball back on downs. Grinstead ran the ball twice for 14 yards and a first down as the game ended.