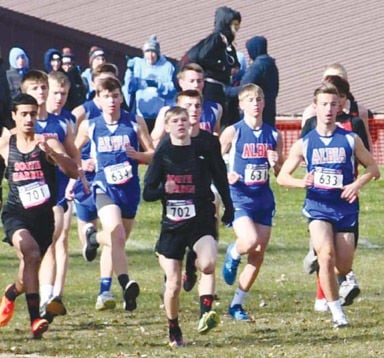 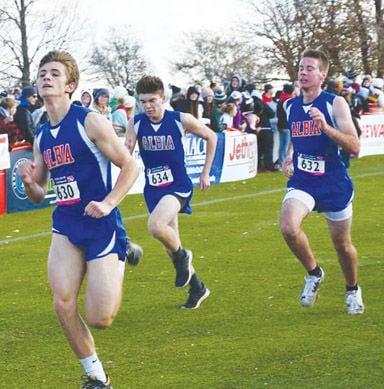 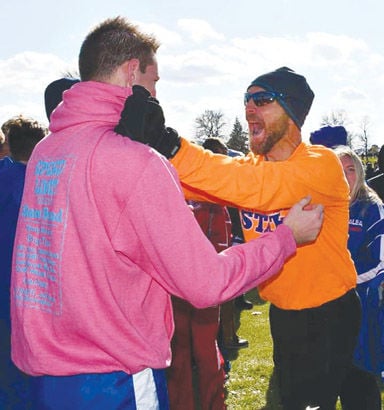 The Albia Blue Demon cross country team finished an astonishing fourth place as a team at the State Cross Country Meet held at Kennedy Golf Course in Fort Dodge over the weekend. In doing so, they completely overhauled the program’s growing record books.

“We had a great day,” said Coach Todd Ratliff. “Every individual on our team stepped up today. I was so happy for them, (and the way they performed all season), but today was something special.”

Landon Noe, junior, running in his third state meet in as many years, led the way to the finish line with Dawson Bonnett, sophomore, directly on his heels. Noe would finish with a time of 17:19.9 with Bonnett posting a 17:20.0 (49 seconds faster than his previous state meet time and his personal best by over 30 seconds). In the team scoring this would put them 18th and 19th overall (31st and 32nd individually), and would propel the team towards the finish they had.

“Landon is a quick starter. He takes off well and just maintains a high pace of running,” said Coach Ratliff. “Dawson snuck his way up through the pack a little more, and worked to a side by side sprint with Landon coming down the finishing shoot. They pushed each other perfectly and held off seven runners (14 points) through the final 400 meters of the race. It was so close, I wasn’t sure who edged who as they finished. Pretty magical to watch them both dig down the way they did.”

In one of the best pack racing of any team in Albia’s history, Barrett Bonnett, senior, Brock Ratliff, junior, and Cody Dalman, senior worked together. “I think they had a plan to start out together, and work through the pack as they could,” said Coach Ratliff. “The course is tight and moves were not always made together, but they worked themselves back to close proximity by the end of the race.”

Bonnett would lead the group through the finish in a career best finishing time of 17:48.4 and gathered in 37th place team points (62nd overall). Ratliff would finish 38th in the team points race (64th overall) with a time of 17:49.2 edging Dalman with his 17:49.8 and 39 points for the team race (65th overall). Bonnett would set an all time career best 5K time with his finish as would Dalman. Dalman would also run over a minute faster than he did his junior year at the state competition-18:55).

“Barrett and Cody ended up working their way through the field very effectively throughout the race. They were able to stay close together and help each other out. Brock would stay patient a little longer through the race, but would be able to close the gap with 600 meters left and be able to finish with the pair of seniors,” said Coach Ratliff. “I was just amazed at the efforts they put in all the way through the finish chute. One of the most exciting finishes that I have seen amongst Albia runners in all my years of coaching.” (To put it into perspective, these three runners were able to beat 20 percent of all individual qualifiers running in the state meet even though in their district they were not individual qualifiers.)

Missouri turns defense into offense in win over South Carolina

After five runners, the scoring is finished, but that does not diminish the affects that runner’s number six and seven have. “We know our score can be no higher than our top five finishers, but our runners also know they can increase the scores of the teams that haven’t had their top five finish,” said Coach Ratliff. “Max Teno and CJ Ratliff did just that. They were able to push up the team scores of six teams with their places.

When asked on the coaches corner, Coach Ratliff was asked by Jason Summers what his goals were for the state meet. Coach Ratliff replied, “I am a numbers guy and understand where the numbers put us. If we do our job today we can place as high as eighth, if we have an average day we may fall as far as 12th. Eighth would be a new best for the program, and I think these guys can do that. But, to be honest with you, the team gathered Friday morning and let me know that I was not invited to go to breakfast with them. When I asked them why, Brock said, because you have your eyes on the math, we want to set our own goal and go try and get it. You have trained us right, we think we can do more than the math says. And Jason, I left it at that.”

After the race when Coach Ratliff hugged his oldest son he asked him what goals the team had set, Brock said, “Top 5.”

To realize five of our seven runners not only set all time bests today, but shattered the best times they had run is crazy,” said the Coach. “They have done so much work this season, and it all paid off at the right time.

“It was interesting to look back at last year’s weather and compare with this year. Last year it was a perfect 56 degrees with zero wind. This year it was 40 degrees with a 34-degree wind chill and 10+ mile per hour sustained wind. To think of the improvements that we showed as a team this year at the state meet, and to know the weather was not near as cooperative is pretty impressive.”