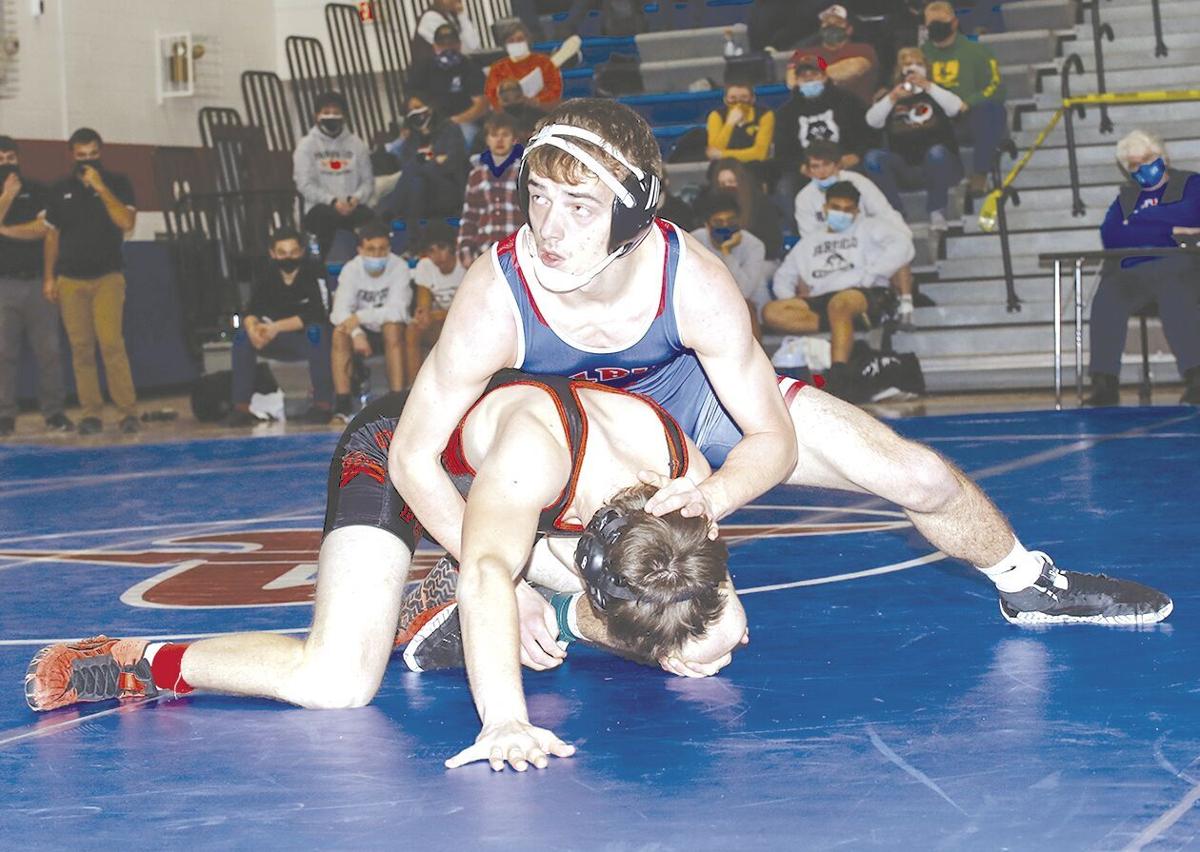 Senior Stephen Conley scored a methodical 3-1 victory over Fairfield’s Logan Adam to advance to districts as a champion at 152. 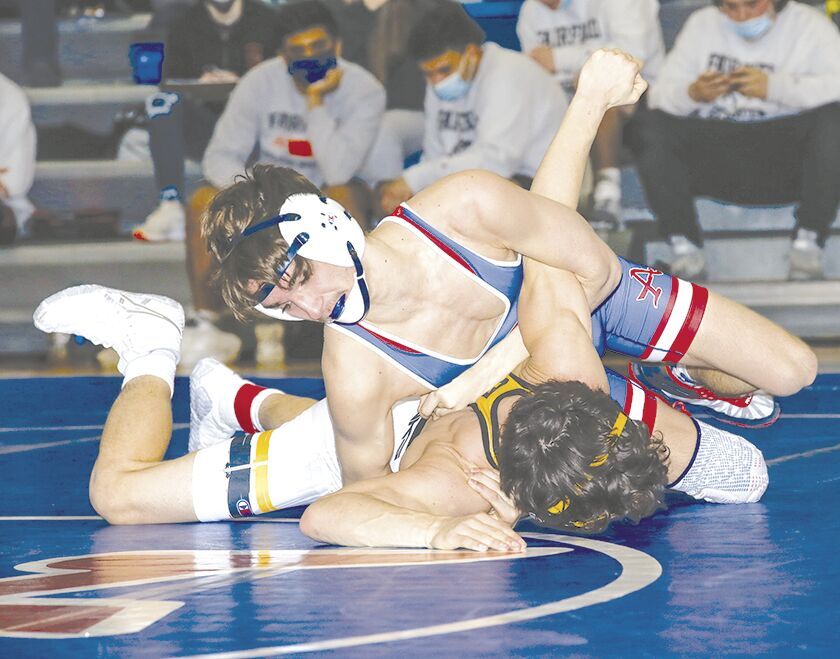 Albia 113-pounder Brodie Conner was dominant at his weight, earning the sectional title. 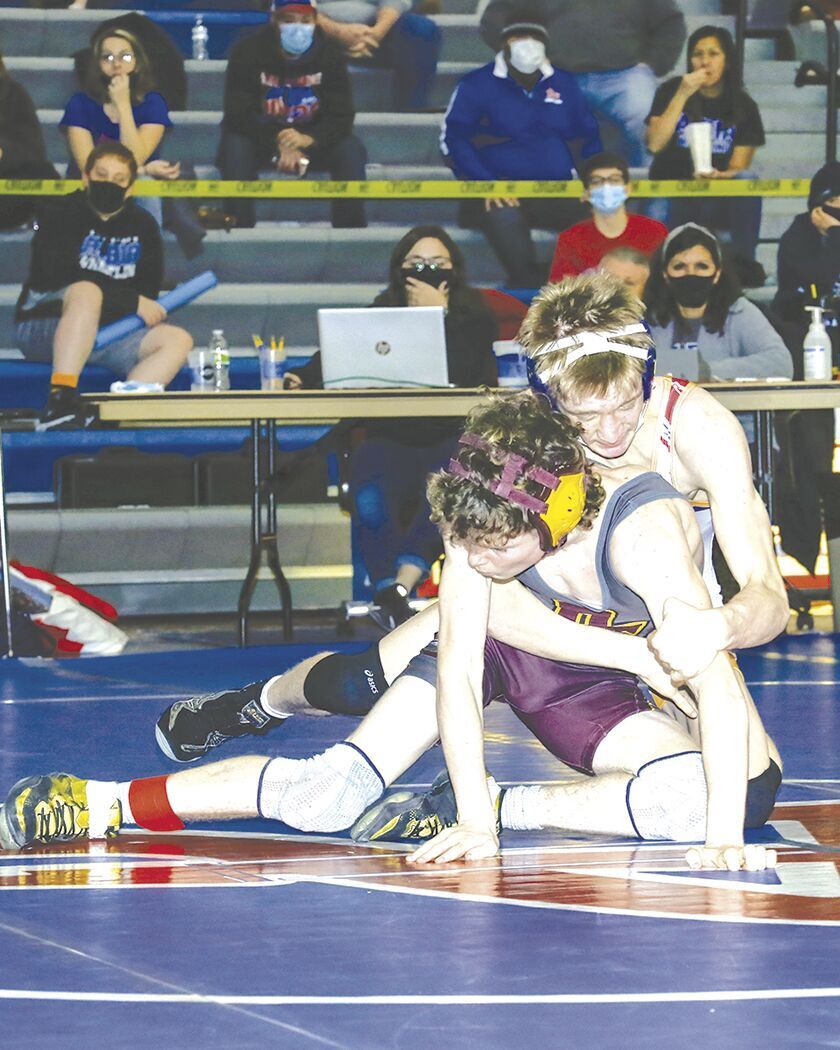 Carter Anderson, ranked #2 at 106, spent a total of 56 seconds on the mat to win his sectional championship.

Senior Stephen Conley scored a methodical 3-1 victory over Fairfield’s Logan Adam to advance to districts as a champion at 152.

Albia 113-pounder Brodie Conner was dominant at his weight, earning the sectional title.

Carter Anderson, ranked #2 at 106, spent a total of 56 seconds on the mat to win his sectional championship.

Mid-Prairie crowned champions in five of the final six weight classes in the 2A sectional in Albia Saturday. But the host Blue Demon team was crowned sectional champion by 14 points because of a dominating performance in the lower weights and key victories up and down the line-up.

“Headed into the week, we scaled back a lot of what we normally do in the practice room to give the kids an opportunity to not only heal their bodies, but also their minds,” said Coach Dave Wenger. “When you get to this point in the year, many times winning matches just boils down to whose body is healthier and who has the right mindset. That was our main focus on the week and we will continue to work on it moving forward as the stakes get even higher.”

By winning IHSAA 2A Sectional 9, the Blue Demons have qualified for Regional Duals. They will face (#14) West Burlington-Notre Dame in Davenport on Tuesday evening at 6 p.m. The winner of that dual will go on to face Davenport Assumption in the regional championship for a berth in the State Duals.

At 126, Logan Carter pinned Brecken Courtright (8-18) of Fairfield to earn the finals, but lost a major decision upset to Davis County freshman Deken Sorensen (13-11). Sorensen scored a pair of first period takedowns and three-point nearfalls in the second and third to earn the win. Carter came back with a dominant performance over Tyler Schutt (15-14) of EBF with a pin in 3:44.

Davis County continued to frustrate Albia when Mustang junior Taylor Huggins (21-4) beat Albia sophomore Justin Keller (33-4) at 132. Keller had beaten Nathan Curry (11-13), EBF by pin in 3:02 to make the finals. Huggins scored a takedown in the first period, a reverse and three-point nearfall in the second period before reversing Keller to open the third. Then the Albia wrestler stormed back scoring a reverse and three-point nearfall, nearly scoring a pin before Huggins sealed the victory with an escape and a takedown.

Keller came back on fire in the wrestleback to pin Zach Westercamp (6-8), Fairfield in 3:28 to win second.

Junior Eli Zanoni (34-11) lost a heartbreaking 6-4 decision to senior Payton Cline (17-11), Fairfield and was denied a wrestleback at 145. Zanoni fell behind 4-2 to Cline going into the third period, but tied the score at 4-4. Cline managed a late takedown and fought off a last second shot by Zanoni. Zanoni pinned Alex Garman (12-23), EBF to win third. Defending state champion Matthew Lewis (29-4) won the title. Zanoni placed third and scored 14 team points.

Lance Helm (17-11), one of Albia’s up and coming freshmen, lost to Kyler Ricard by pin in 4:55, then lost a 10-4 decision to Sam Hash (1-0), Centerville, to place fourth and provide Albia with nine important team points.

Freshman Paul Ballard (30-5) finished second, scoring a pin in 1:01 over Cruize Flanders (16-27), Centerville. He met eventual champion Josh Wallington (34-3), a Mid-Prairie senior and was pinned in 1:22. Ballard got a wrestleback and pinned Cesar Smithburg (21-11), Fairfield in 1:24 to advance to districts.

“We didn’t necessarily have our best day,” said Coach Wenger. “Several individual matches flipped from previous results in the season and that’s sometimes hard to take. Fortunately it didn’t cost us a chance to move on to next week, but it certainly sets up some interesting scenarios for districts, where we will look to flip those matches back in our favor. It certainly could be the difference in moving on to yet another week.”