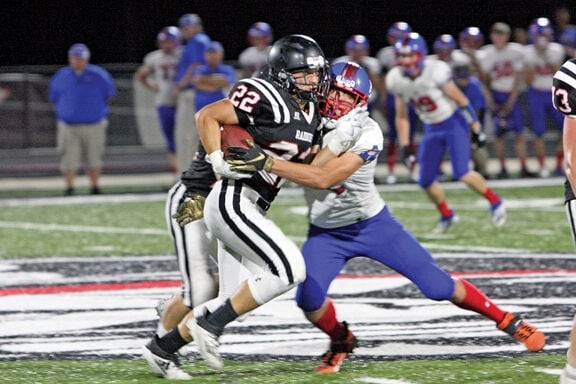 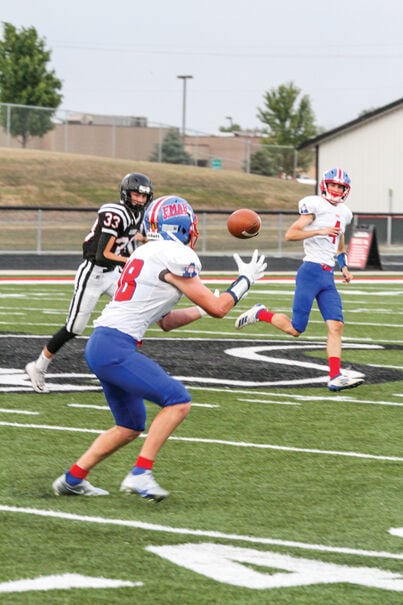 Blake Chance avoids the rush and slips a pass out to Nate Wynn for a gain of eight yards. (Jesse Simmons photo)

Blake Chance avoids the rush and slips a pass out to Nate Wynn for a gain of eight yards. (Jesse Simmons photo)

A 36-7 loss to Mount Ayr was not what Coach Justin Huber, his staff and team were hoping for, but the score doesn’t reflect the true picture of the outcome. “There were a lot of good things we took away from the loss,” said Coach Huber. “We entered the game down two starting linemen from illness and injury and were making adjustments along the line the whole first half and our kids responded well.

“We ran the ball better than we’ve run it in three or four years,” he said. “Our backs need to be more patient waiting for holes to open, but overall our blocking was better and Damon (Sovern) and Chaz (Fee) ran hard. From last year to this year, we’ve made huge strides.”

Albia committed zero penalties and gave up just one sack. “We struggled passing the first half adjusting to a new line, but I thought Blake (Chance) settled in in the second half and threw well,” said Coach Huber.

Huber had high praise for some underclassmen who stepped up into pressure situations. “Landon Simpson really had a nice game at linebacker and tightend,” said Coach Huber. “Gavin Archer stepped in at offensive and defensive tackle and held his own.”

Not a great start

Albia started poorly with the Blue Demons fumbling the opening on-side kick. The Raiders moved from their own 26 in seven running plays, never gaining more than seven yards to score with 9:07 left. Dawson Swank scored from a yard out and Peyton Stull kicked the extra point.

Albia successfully fielded another onside kick and its offense looked good on the first drive, moving from the 27 to the 42 behind a three-yard run by Chaz Fee, a one-yard pass from Blake Chance to Nick Heffron and an 11-yard pass to Liam Winfield.

But Fee was dumped for a seven-yard loss on the ground and Chance threw incomplete twice to force the punt.

The Raiders ran the ball successfully with a stable of runners including Payton Weehler and Adler Shay, but penalties negated a pass from Jaben Frost to Austin Cole, Damon Sovern broke up a pass and after an 18-yard run by Cole to set up a fourth and one at the 34, Albia’s interior line stopped the Raiders cold.

A pass interference call put the Blue Demons at the 49 and a five-yard run by Gage Oddo set up a second and five. Sovern ran for one, then Chance hit Nate Wynn for eight and a first down at the 37. A facemask penalty moved Albia to the 19, but Chance was sacked (the only time all night) and dropped for a 10-yard loss as the first quarter ended with the Raiders up 7-0.

Even with a football season, Badgers facing revenue shortfall of up to $70 million

The drive bogged down and David Fisher just missed a 47-yard field goal.

A holding penalty, a sack by Garin Grinstead and an incompletion forced Mount Ayr to punt with 7:18 left, but Albia punted back less than a minute later. The Raiders took over on the 43, moved to the 29 on runs by Weehler and Frost, then Weelher broke free for a 29-yard touchdown run to make it 14-0 with 5:48 left in the half.

Albia’s offense looked out of sync on the next drive, Winfield punted and Mount Ayr drove from their own 40 to score from eight yards out with 1:45 left. The kick failed and the score was 20-0.

Sovern ran for three, Fee for five and Sovern for nine as the half ended.

The Raiders had a long drive to start the third quarter sparked by runs of 32 and 11 by sophomore Jaydon Knight, but Albia held at the 18. Starting at the 16, Albia came out gunning with Chance hitting Blake Stewart for nine and then throwing to a wide-open Nick Heffron on the far side, but the ball slightly wobbled coming out of Chance’s hand, it was just short and picked off at the 45.

Mount Ayr’s Shay gained 21 to the 25, then Cole weaved his way 25 yards for the score. The two-point conversion pass was good and the Raiders led 28-0 with 6:16 left in the third.

Albia’s passing offense showed signs of good things to come with Chance hitting Stewart for 23, but Sovern lost three and Chance threw incomplete twice to force another punt. Albia forced a fourth and five and a punt with 3:04 left, but Mount Ayr faked the punt and ran to the Albia 31 for the first down. Sophomore sensation Knight ran for 26 to the two and Cole bulled over for the score. The two-point conversion was ood and for a moment the clock went non-stop with the score 36-0.

But Chance rallied his offense, driving from the 36 to the Raider 28 with passes to Heffron for 11 and Stewart for 15 before two passes fell incomplete. Mount Ayr took over at the 28, but immediately fumbled. Chance needed one pass to a streaking Stewart to put Albia on the board and the clock back in regular time. Fisher added the PAT and Albia trailed 36-7. Justin Keller brought Albia’s offense out for its final series and went from the 41 to the Mount Ayr 30 before time expired.

The Blue Demons travel to Davis County where they meet a Mustang team that defeated Centerville at home on Friday. “Their offense looks a whole lot like our offense during Coach Staton’s time here,” said Coach Huber. “They use a power I and run straight at you. I think it’s going to come down to who is tougher both mentally and physically.”