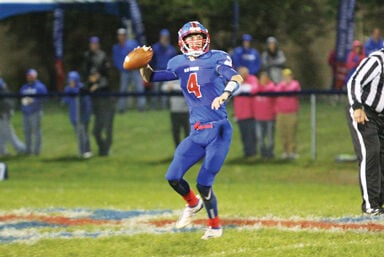 Albia football statistics are still being updated by coaches, but senior  Blake Chance set at least six records as quarterback for the Blue Demons the past three years. 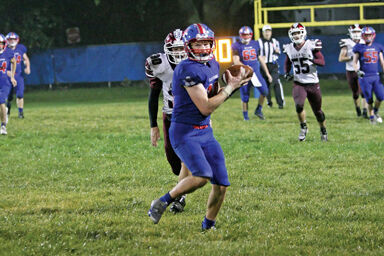 Albia football statistics are still being updated by coaches, but senior  Blake Chance set at least six records as quarterback for the Blue Demons the past three years.

The only Albia All-District football player who didn’t have a single statistic was second teamer Zack Jones, Albia’s senior center. Ironically, no player who made All-District playing offense would have gotten any mention had Jones not been able to successfully snap the ball to first team All-District quarterback Blake Chance.

Jones was a three-year starter for Albia at center and rarely missed a snap.

Chance earned first team honors at quarterback, completing 78 of 152 passes for 1,200 yards, 17 touchdowns and seven interceptions. He had a quarterback rating of 117.6 and a completion percentage of 51.3 percent.

Senior Nathaniel Wynn will go down as one of Albia’s all-time great receivers and was rewarded as a first team All-District pick at wide receiver. He caught 34 passes for 462 yards and five touchdowns. He averaged 13.6 yards per catch. Wynn was also a top defender with 26.5 tackles and an interception.

Wynn has at least two records, most receptions in a season (56, 2019) and career receptions (92, 2018-2020). Senior Nick Heffron, Wynn’s mate as a receiver the past three years, earned first team All-District as a linebacker with 34 tackles. But he caught 12 passes for 394 yards and six touchdowns, averaging 14.9 yards per catch.

Junior Jackson Pence earned first team honors as an offensive lineman, but was also a two-way player with 19 tackles on the season.

David Fisher earned second team All-District honors as a kicker, averaging 43.3 yards kicking off and hitting 13 of 17 point after kicks. Fisher also became one of Albia’s most improved defenders, picking up 14 tackles and an interception.

Junior Damon Sovern, a second team All-District pick at defensive back had 31 tackles. He also had 53 rushes for 167 yards in Albia’s much improved running attack and had eight catches for 98 yards.

Garin Grinstead was an honorable mention punter with a 31.8 per yard average over 32 punts. He was also one of Albia’s most versatile players, completing 24 of 36 passes for 300 yards and two touchdowns and picking up 21.5 tackles as a linebacker.

Paul Ballard was the only freshman in the district to receive any kind of honor. Ballard was an honorable mention offensive lineman, but he also played both offense and defense for Albia, picking up 8.5 tackles.