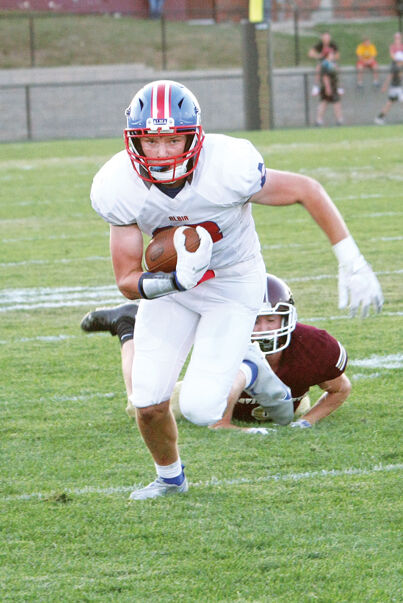 Running the football for the first time since sixth grade, Nate Wynn rushed 15 times for 113 yards and a touchdown as Albia re-established their running game. 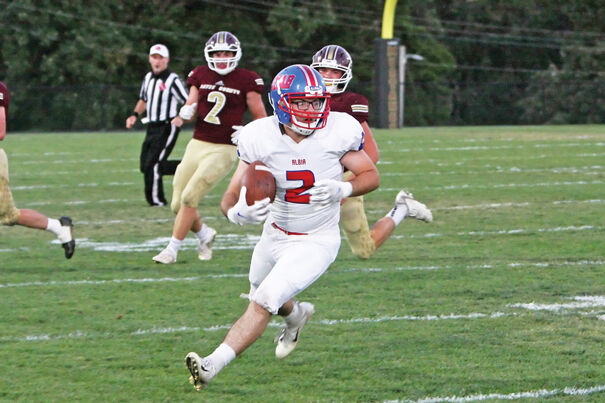 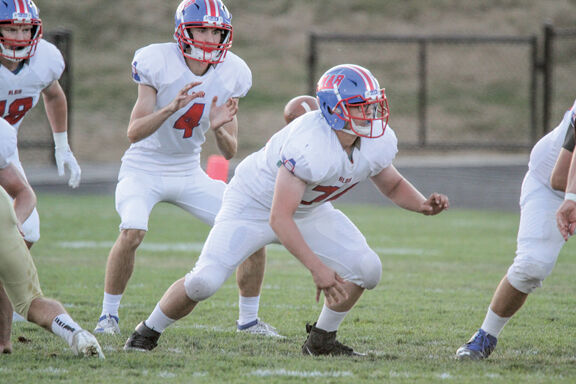 Trey Sample had a good start on the offensive line for Albia, blocking for Blake Chance during Albia’s first two touchdowns, but came out with a hamstring injury.

Running the football for the first time since sixth grade, Nate Wynn rushed 15 times for 113 yards and a touchdown as Albia re-established their running game.

Trey Sample had a good start on the offensive line for Albia, blocking for Blake Chance during Albia’s first two touchdowns, but came out with a hamstring injury.

There was good news in Albia’s 38-27 loss to Davis County. The Blue Demons had the best balance offensively in probably the last five seasons. Blake Chance completed 12 of 19 passes for 220 yards and Nate Wynn had 113 yards rushing on 15 carries. Chaz Fee added 38 yards on the ground and Damon Sovern had 21 yards rushing.

“It really came down to about four plays and our inability to defend the deep pass,” said Coach Justin Huber. “Our defensive backs got up too close to our linebackers and the Glosser kid and the Zeitler kid were able to get behind our D-backs.”

Albia had their best start in years, opening up a 14-0 lead after holding the Mustangs on a fourth and two and then a McCall fumble. Running in the backfield for the first time since sixth grade, Wynn raced 49 yards to score Albia’s first touchdown with 9:02 left in the first quarter. David Fisher’s point gave Albia a 7-0 lead.

The Blue Demon defense rose up again and forced a Mustang punt to the Albia 26. From there Wynn gained 25, and on second down Chance hit Wynn along the sideline and the senior ran the ball to the two. From there, Chance found sophomore CJ Flattery for the score. Fisher’s point made it 14-0 with 4:22 left.

But Davis County unleashed the passing of Maeder and receiving of Glosser. Glosser got behind the Albia defensive backfield and Maeder hit him in stride for a 78-yard touchdown pass. The kick failed and with 3:32 left, Albia led 14-6.

The Blue Demons punted and Davis County started at their own 34. Clayton Smith ran for 14 and on third and two from the 44, Maeder hit Glosser again with a long scoring pass. The run failed and the score was 14-12 in favor of Albia.

Chaz Fee got things going as the second quarter began with a 12-yard run, Wynn ran for five, Chance hit Flattery for 11 and Wynn picked up the first down with a four-yard run to the 48. On third and seven, Chance hit Blake Stewart with a 15-yard pass to the 30, Wynn gained five to the 25 and Chance found Stewart in the endzone for the score. Fisher’s kick was no good but Albia led 20-12 with 7:05 left.

McCall rushed for 27 yards on the next Mustang drive, Maeder found Glosser for 34 yards and then passed eight yards to Glosser for his third receiving touchdown. The run was good and with 4:00 left in the half, the game was tied at 20-20.

The Blue Demons used Wynn almost exclusively to run the ball as the half wore down. He picked up 4, 9, 4, 10 and 5 to the Davis County 17, but a holding penalty and a loss of five by Chance hurt the drive. Chance found Stewart for 13 to the 20, but another holding penalty put the Blue Demons out of field goal range as the half ended on an incomplete pass in the endzone.

National buzz: A guide for college football being played outside of the Big Ten

Davis County needed just 47 seconds to take the lead for good as the third quarter opened. McCall ran for 19, then Maeder hit Zeitler for a 52-yard scoring strike to make the score 26-20 with 11:13 left in the third.

On Albia’s next drive, Chance hit Liam Winfield for a 26-yard gain up the middle and Wynn ran for six to the 17, but Chance threw on the run into the arms of a Davis County defender at the two to kill the drive.

But it really didn’t hurt as Albia forced a punt to the 31. Fee ran for six, Wynn gained one and then Chance found Nick Heffron in the deep far corner for the touchdown. Fisher’s kick cut the score to 32-27.

McCall and Smith dominated Davis County’s next drive as the fourth quarter began. McCall ran for 29, Smith for two, 16, 11 and five to the one-yard-line and Maeder kept for the game’s last score with 9:22 left.

Davis County was able to run out the clock with McCall and Smith taking turns running the ball.

“We did so many things right,” said Huber. “We got the offensive balance we wanted, our running backs really had a great night and for the most part our line play was good.

“We just had some mental breakdowns that a really good quarterback took advantage of.”

Coach Huber said the team is going to get healthier as the week goes on they prepare for Clarke (0-2). Trey Sample was able to start, but couldn’t finish with a hamstring pull, Eli Beary will be back after a COVID-19 quarantine finally expired and Gage Oddo’s knee should be 100 percent. The team will likely be without big junior tackle Gavin Archer again nursing a knee injury.

Huber said Clarke has a couple of lanky receivers and some size on the line to deal with this Friday at home.