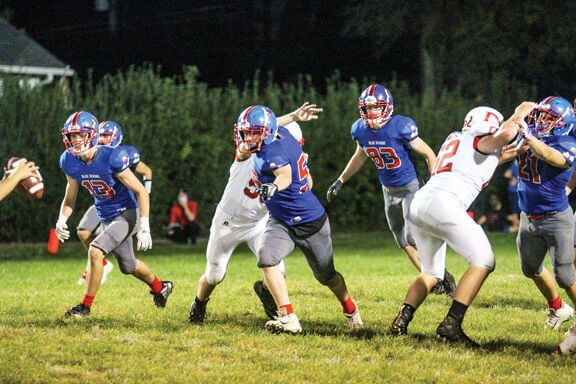 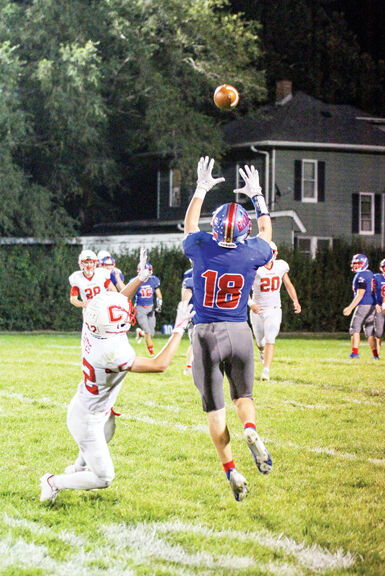 Nathaniel Wynn goes up for a ball thrown by Blake Chance. Wynn had six catches for 164 yards and two touchdowns. (Jesse Simmons photo) 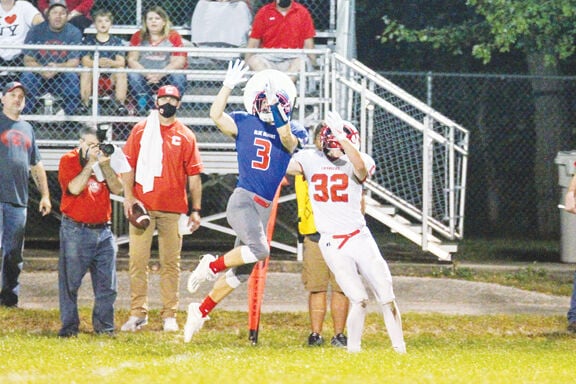 Junior cornerback Chris Kilfoyle skies high to break up a pass and nearly intercepted a Mason Smith pass as he looks for Alex Bates.

Nathaniel Wynn goes up for a ball thrown by Blake Chance. Wynn had six catches for 164 yards and two touchdowns. (Jesse Simmons photo)

Junior cornerback Chris Kilfoyle skies high to break up a pass and nearly intercepted a Mason Smith pass as he looks for Alex Bates.

Albia torched Chariton for 426 yards of passing in a 47-21 homecoming victory on Friday. Blake Chance completed 10 of 16 passes for 294 yards and four touchdowns before being pulled after tweaking his ankle and giving way to junior Garin Grinstead in the fourth quarter. Grinstead was 5-6 for 132 yards.

The quarterbacking combo hit five receivers with Nate Wynn catching seven passes for 154 yards and two touchdowns. Nick Heffron had three catches for 192 and touchdown catches of 58 and 73 yards.

“We really came back focused after our loss to Centerville,” said Coach Justin Huber. “We really had some younger guys step up on defense. Landon Simpson led us in tackling with 13 and Gage Oddo came up big when we moved him in at nose tackle.”

Chariton had a lot of success against Albia’s four-man front running sophomore Ryder McGee before Oddo, all 160 pounds of him, clogged up the middle. He ended up with five tackles. Nick Heffron had eight and Nate Wynn seven.

The Blue Demons started out fast, taking a 27-0 halftime lead and then spun their wheels in the third quarter as a myriad of roughing penalties allowed Chariton to control most of the third quarter, ultimately scoring to make it 27-7.

“We still need to learn how to finish a game,” said Coach Huber. “Penalties really came into play in the second half. But there were a lot of things to celebrate. Hayden George hitting a PAT for us near the end of the game really capped things off for homecoming.”

The final few minutes of the fourth quarter were nuts as Albia failed to cover an onside kick, leading to Chariton’s third touchdown, but Gage Oddo picked up a short onside kick and ran it 45 yards to boost Albia’s lead to 41-21. The final score of the game came on a Grinstead to Landon Simpson pass of 35 yards.

“I talked with Coach (Jerry) Staton over the weekend and he think’s Gage’s kickoff return on an onside kick might be some sort of state record,” said Coach Huber. “He’d never heard of anything like that before.”

Albia’s rushing yardage is a little deceiving since Adam Sovern had a beautiful touchdown run of over 50 yards called back on a penalty.

There wasn’t much question about where Albia was hoping to get their offense. Blake Chance passed on the first play from scrimmage and on a third and nine hit Liam Winfield for a 20-yard gain. He came back to Nate Wynn for gains of six and six, found Wynn again for 30 yards to the one and passed to Austin Stanley for the game’s first score with 6:46 left.

The Chargers used a steady diet of Mason McGee to pick up three first downs with runs of 13, 5, 4, 5 and 6, then gave to Sam Primakov for 14 to the Albia 19 before the Blue Demons stopped the Chargers cold with 1:42 left in the quarter.

Wynn gained a yard to the 19, then Chance hit his senior receiver on a picture perfect slant that went the distance, an 81-yard touchdown run. David Fisher’s kick was good and Albia led 13-0 as the quarter ended.

Jackson Pence and Payton Rubel made back-to-back stops for loss on McGee and forced a punt. On third and six, Chance scrambled and lofted a pass deep that was intercepted by Josh Desmond. Chance hustled down the field and stopped Desmond before he could return the ball.

Chris Kilfoyle broke up a pass, then diminutive freshman quarterback Mason Smith threw incomplete with 7:23 left in the half. Albia took over at their own 40, Chaz Fee ran for 14 to the 46, then Sovern made a beautiful cutback move and raced 46 yards for what looked like a touchdown. It was called back on a holding penalty.

Chance came back with a nice 24-yard run on a scramble, Sovern gained 13 to the 20, and then Landon Simpson made what looked like a terrific shoestring catch in the endzone that was ruled incomplete. On third down Chariton got away with a faceguarding when Chance threw into the endzone for Wynn and on fourth down he was intercepted with 5:23 left.

McGee rambled for 10 yards and picked up two four-yard gains before Albia stopped him cold and forced a punt.

Starting at the 25 with 2:52 left, Chance went to work, hitting Wynn for a 17-yard gain and then finding Heffron in stride for a 58-yard touchdown pass. Fisher’s kick was good and Albia led 20-0.

Chariton went three and out and punted with just over a minute left in the half. Chance needed just two plays, a two-yard pass to Winfield and a 73-yard pass to Heffron to give Albia a 27-0 halftime lead.

The second half was a little frustrating for Albia faithful hoping for a continuous clock, but the Chargers put together a really nice 18-play drive led by the passing of Smith to senior tightend Preston Lane and Kasyn Paige and a huge roughing penalty mid-way through the drive. The Chargers moved from their own 15 to the Albia one where McGee scored on a second and goal. The kick by Wyatt Chipp was good and Albia led 27-7 with 3:45 left in the quarter.

Albia exploded with a double pass, Chance to Grinstead and then Grinstead for 60 yards to Heffron to the Chariton 19. Fee ran for 10 to the 10 to set up a first and goal, but a shoestring tackle on what looked like a sure touchdown, caused Sovern to fumble and the ball went back to the Chargers.

Chariton had the ball as the fourth quarter began and went for it on a fourth and three at their own 34. Primakov was dumped for a two-yard loss and Albia was back in business, this time with Grinstead at the helm. He threw to Wynn for 10 to the 27, came back to Simpson for 12 to the 21, Oddo rushed for seven, and on fourth and three, threaded the needle to Wynn for the score. Fisher’s kick made the score 34-7.

Chariton’s quarterback, Smith, was undeterred, hitting Lane for 23 yards, then benefitting 15 more yards on yet another roughing penalty. On a play better suited for Halloween, Smith passed to Alex Bates from the 15, he fumbled at the one, the ball bounced into the endzone and Bates recovered for the touchdown. Chip’s kick made it 34-14.

Chariton caught Albia napping on the ensuing kickoff and recovered the on-side kick. This time it was a “helmet to helmet” penalty on a quarterback rush after Albia had stopped Chariton on a fourth and 22 to keep the drive alive. On another fourth down, Smith hit Lane from the seven for the score to make it 34-21.

The Chargers may have gone to the well once too often as the onside kick never went the needed 10-yards, but a very alert Gage Oddo picked the ball up and raced 40 yards for the score. Hayden George nailed the extra point and Albia led 41-21.

The game ended with a three and out with Chariton trying to maneuver from their own nine. Oddo gained eight, Eli Zanoni gained two and then Grinstead passed to Simpson for the touchdown. George’s kick was wide right.

The Blue Demons face a daunting task Friday as they travel to Monroe to face #1 ranked PCM. The Mustangs have won their last three games by shutout scores of 60 (Chariton), 68 (Saydel) and 69 (Centerville).