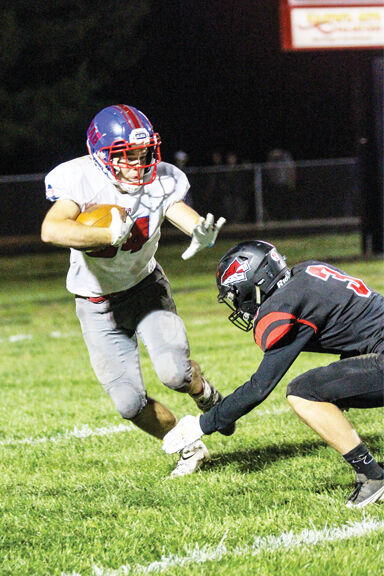 Liam Winfield catches on of his six passes on the night and moves to avoid a Big Red tackler. (Jesse Simmons photo) 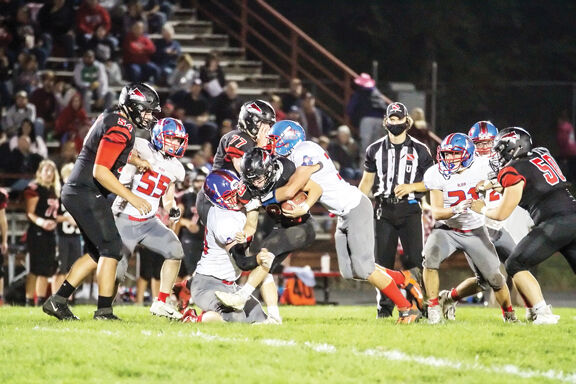 Liam Winfield catches on of his six passes on the night and moves to avoid a Big Red tackler. (Jesse Simmons photo)

Albia coaches and players probably saw the same play in their dreams following Friday’s 45-7 loss to Centerville. It was Sawyer Wardlow, a rangy junior, running a quarterback read option, faking (mostly) to a halfback or slotback, pulling the ball out and running right up the middle of the Albia defense.

But Wardlow had another weapon in his offensive arsenal that he hadn’t seen since the opening game of the season. Kellen Johnson, a senior receiver, caught six passes for 97 yards, junior Kade Mosley had two catches for 61 yards and a touchdown and Merrick Mathews had three catches for 49 yards and a touchdown. Wardlow actually hit nine receivers, shredding Albia’s defensive backfield for 291 yards.

“It’s a game we need to flush,” said Coach Justin Huber. “I’m not sure we’ll watch much of the game film because I’m not sure there’s much we can learn. Our focus wasn’t there at all. We’re a better team than we showed on Friday and our guys know it.”

Coach Huber was also not happy about an Albia “fan” planting a sign in the Centerville endzone prior to the game. “Like Centerville ever needs more encouragement to beat us,” he said.

The Blue Demons also entered the game missing a number of key players. “We go into games not making excuses, but our offensive and defensive line was really thin,” he said.

For the Blue Demons, the first six minutes of the game were golden. Centerville moved right down the field, scoring in nine plays, using Merrick Mathews as the main rushing weapon with Wardlow running for 10 up the middle, then scoring from 14 yards out, again on the quarterback option.

But Albia came right back with Nate Wynn throwing a 35-yard halfback pass to Damon Sovern to the Centerville 17 and Blake Chance passing to Wynn 12 yards for the score. David Fisher’s kick gave Albia a 7-6 lead with 6:24 left in the quarter.

After that, pretty much what could go wrong, did go wrong. Kade Mosley caught a 58-yard touchdown pass in a two-play series that put Centerville up 12-7 after a failed two-point conversion.

Albia’s best defense was Centerville fumbling punts. The Blue Demons went three and out, punted and Sovern recovered a fumbled punt giving the Blue Demons the ball on the 43. The running game went nowhere and Chance threw incomplete on fourth down.

The Big Red used Wardlow almost exclusively rushing for 18, 14, 4, 1 and 15 before scoring on the first play of the second quarter. The kick was good and the Big Red led 19-7.

Junior quarterback Garin Grinstead came on and had a rough couple of series before settling in and winding up completing 11 of 16 passes for 93 yards. Sovern rushed six yards and then Grinstead found Wynn for a three-yard gain setting up a third and one, but a fumble gave Centerville the ball on the 33 with 10:24 left in the half.

Wardlow, who had lots of turnovers in his first three games, recovered his own fumble, then passed to Johnson for eight and scored on a fourth and three with a 26-yard run…right up the middle on the option play.

Albia lost five yards on their next series, Grinstead boomed a punt and the Big Red fumbled again with Albia recovering deep in Centerville territory at the 26. But a fumble and a sack for a loss of 13, forced yet another punt.

Badgers football: Progress has been hard to come by for Scott Frost and the Nebraska Cornhuskers

The Big Red took over at the 20, Wardlow ran for 19 then found Mathews for a 36-yard touchdown pass.

The “could go wrong”

Albia’s defender was dragged down leaving Mathews wide open for the catch.

Trailing 32-7 with 3:49 left, Wynn gave the rushing game some life with a 16-yard run, but the drive stalled and Albia punted, this time to the 11 where the ball was fumbled again, but recovered.

Wardlow hit Bradley Watts for a 19-yard gain, ran for 22, then hit Johnson on a deep fly pattern to the Albia 13. With 13 seconds left, Wardlow’s pass in the endzone was tipped by an Albia defender right into the hands of Griffin Weber. What could go wrong, did go wrong.

Leading 38-7, Centerville recovered the kickoff, Wardlow hit Johnson on that same deep fly patter for 36 yards to the Albia 11 and time ran out.

The second half, the Blue Demons lost 7-0. The defensive effort was much improved, Grinstead moved the offense well, but Centerville’s defense continued its string of second half shutouts.

Damon Sovern picked up 20 yards on the first run from scrimmage, then Grinstead hit Blake Stewart for 15 to the Centerville 25. But two disastrous sacks, one for 11 and another for 10 turned the ball over to Centerville at the 49.

The Blue Demons forced a punt with 6:09 left in the quarter, but Albia punted back despite a completion from Grinstead to Liam Winfield.

The Big Red regained their rushing swagger with Wardlow running for 16, Watts for six and Wardlow for 10. Wardlow hit Mason Bauman for 28 yards to the Albia 10, threw to Johnson for six to the four and handed to Watts for the score with 2:21 left, making it 45-7.

Centerville’s Coach Matt Kovacavich left Wardlow in the game throwing deep in the final quarter and Centerville moved to the Albia nine before the defense stiffened, forced a fourth down at the nine and appeared to have stopped the Big Red on an incomplete pass when a completely mystifying pass interference penalty was called.

The football gods were with Albia, however, and Centerville fumbled at the one. Winfield came out passing, hitting Winfield for 15, Wynn for six and Winfield for 23 before the game ended.