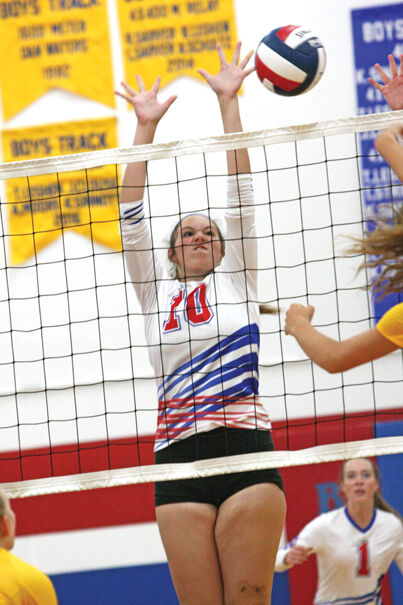 Sophomore Addy Halstead had a great night at the net Monday blocking a half dozen Knoxville hits. 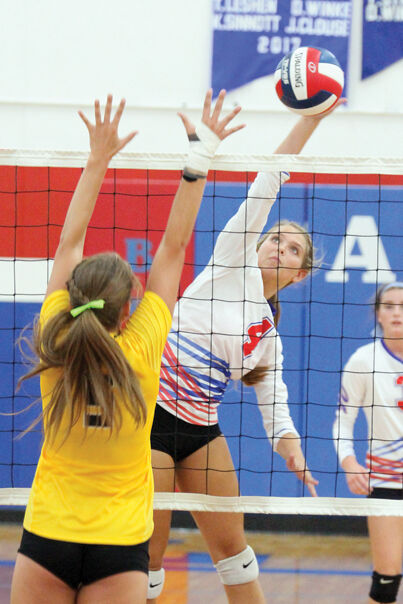 Jenna Gronewold is pictured with a kill shot, but she was even more effective at the service line with five ace serves.

Sophomore Addy Halstead had a great night at the net Monday blocking a half dozen Knoxville hits.

Jenna Gronewold is pictured with a kill shot, but she was even more effective at the service line with five ace serves.

The Panthers had four talented seniors on the court the entire match with the Lady Dees sometimes playing with five sophomores and a junior on the court. “Their experience really showed,” said Coach Missy Cox-Dustin. “They have some really fine hitters and the pressure they put on our defense created a lot of errors, in addition to the outright kills.

The Panthers jumped to an 18-3 lead in the first set, scoring on 12 kills and three ace serves.

Albia’s first point came on a kill by Addy Halstead to make the score 2-1 and Ashley Beary had a nice kill off an Emma Wenger set to make it 6-2, but six errors (hitting and returning serve) hurt Albia’s effort. Jenna Gronewold came up with a nice block for a point and then had two ace serves as the set ended.

Knoxville jumped to an 8-0 lead, but the Lady Dees settled in, cutting the lead to 8-5 after really fine middle net play by Halstead who had three blocks for points. Beary had a kill and Gronewold had an ace serve in that rally. Halstead would have another block for point and Gronewold another ace serve as the Dees fell 25-11.

Even with a football season, Badgers facing revenue shortfall of up to $70 million

The Dees came back in the third set to play some of their best volleyball of the season, trailing 10-8 at one point before losing 25-18. Wenger had a couple of nice dinks for points, Beary had a kill and Gronewold had two kills. Sydney Hoskins, Sophie Waber and Halstead also had kills. An ace by Gronewold cut the score to 21-16.

“We need to start communicating with each other more and we’re looking for some girls to step up and take charge,” said Coach Cox-Dustin. “We get Tanae (Thiravong) back the end of the week and that will help our front row.”