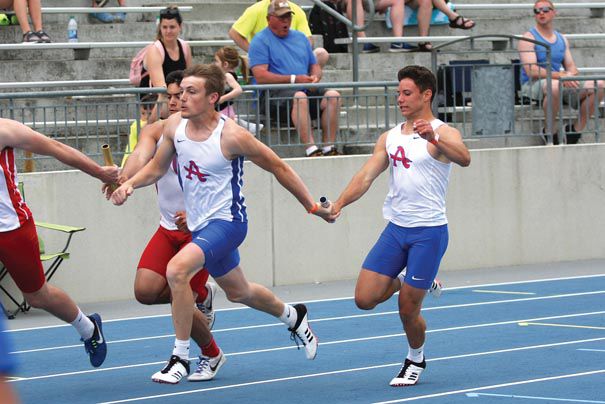 It was Drew Winke to Nate Crall in the 4 x 100 meter dash final at the Iowa State Track meet. The Blue Demons came home with a third place medal. 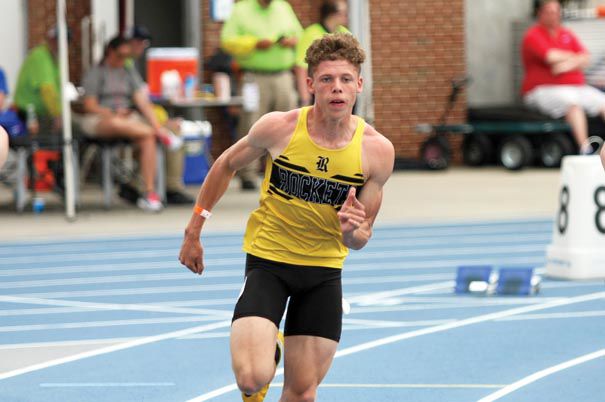 It was Drew Winke to Nate Crall in the 4 x 100 meter dash final at the Iowa State Track meet. The Blue Demons came home with a third place medal.

Top area sports May through August were dominated first by the ACHS boys track team and then by the Lady Dee softball team. The Blue Demon track team won an incredible sixth straight SCC championship and sent a large contingent of athletes to the state meet.

The Lady Dees made it three straight conference titles, then made their third straight appearance in the girls state tournament.

Albia was led by sophomore Tein Thiravong with an 84 at the Knoxville Invitational.

The Blue Demon track team won the Warrior Invitational track meet at Van Buren High School in Keosauqua on Monday night, tuning up for the SCC championship in Chariton tonight.

The future of Albia track looks bright as the eighth grade boys captured the title at the Albia Invitational on Monday. Justin Keller broke the 100-meter hurdle record held since 2014 by Tyler Stringfellow, a state champion in the shuttle hurdle relay.

The boys’ championship rings moved to the other hand as the Blue Demon track team collected its sixth SCC Championship in a row on Thursday in Chariton. Albia scored 153 points to win the championship followed by Centerville (131), Davis County (90), Knoxville (75), Chariton (70), EBF (35), and Clarke County (34).

Tein Thiravong shot a personal best 78 to lead the Albia boys golf team to a third place finish at the Chariton Invitational on Thursday.

The Albia boys’ golf team came up one stroke short at the South Central Conference golf tournament held at Edmunson Golf Course in Oskaloosa on Wednesday. Knoxville won the event coming in at 338 with Albia one stroke behind with 339. Ian Flahive recorded the top score for the Blue Demons shooting a personal best 44-34--78, finishing fourth. His 38 was a career low for the junior.

The doubles team of Tate Padilla and Tyler DeBrouse went to the finals in the SCC championship by collecting a bye in the first round, then beating a team from Knoxville 6-3, 6-3 only to lose to the Clarke County team 6-1, 6-1 in the finals.

The Albia boys’ track team qualified five events for the Iowa High School State Track meet on Friday in Eddyville. The open 400 will have both Logan Stalzer and Nick Heffron running while the 4x400 team of Nathan Crall, Beau Leshen, Heffron and Stalzer along with alternates Gage Wilson and Wade Myers, also will be heading for Des Moines.

Ava Brown shot a 102 to earn a spot on the South Central Conference all-conference team.

Haleigh McDonald shattered Brenda Wignall’s 1987 shot put record of 35’6” with a toss of 35’11” at the state qualifying meeting in Eddyville but did not qualify for state.

The Blue Demon soccer team ended the regular season strong defeating Centerville 3-0 on Tuesday at home and taking a 1-0 victory over #13 Chariton.

The Albia 4x100 relay team went into the finals Saturday afternoon and the team of Winke, Crall, Leshen and Stalzer brought home the third place medal in a time of 43.60.

Two-time state champion Aiden Reeves of Albia was selected as one of 96 All-Americans by Wrestling USA Magazine.

The Lady Dee softball team took two of three games at the Williamsburg tournament on Saturday, opening the season at 4-2.

The Blue Demon baseball team split an SCC double header with Knoxville on Friday night in Knoxville, picking up their first win of the season against the four-time defending South Central Conference champions.

Both the Albia Lady Dees and EBF Rockets start the softball season with 8-3 records.

Amid civil unrest, Packers players speak out, hope for change

After a 2-1 loss to EBF in the season-opener, the Dees dominated the Rockets, slamming out 12 hits, including a grandslam homerun by Alex Beard, enroute to an 11-3 victory at home.

The Blue Demon baseball team scored in the final at bat to defeat Clarke County 12-11 on Friday night in Albia.

The Albia Lady Dees were on their way to an 11th straight victory, when a heavy thunderstorm hit Oskaloosa, suspending their game with Class 2A eighth ranked Sigourney with the Dees up 7-4 in the fourth inning.

The Blue Demon baseball team split with the Keokuk Chiefs on Monday night in Keokuk. Albia won 5-1 and lost the second game 4-3 in extra innings.

Ian Greiner, a forward on Albia’s soccer team, was named to Class 1A All State Honorable Mention.

The Albia freshmen softball team ran their record to 11-1-1 with a 16-4 win over Knoxville last Thursday and a 7-2 win over Chariton on Monday.

The stars would have had to have aligned perfectly for Clarke to capture a tie for the South Central Conference championship, but Eddyville-Blakesburg-Fremont erased any hope of that by drubbing the fading Indians 8-1.

Centerville’s unbeaten streak in South Central Conference baseball ended in a 4-1 shocker of a loss to Clarke. It was just the fourth conference win for the Indians. None-the-less, the Big Red clinched the championship and would end with a 17-1 record if they could sweep Chariton on Monday. No scores were available regarding those games.

On the girls side, a combination of Albia winning its 11th straight conference game on Thursday against Centerville, 5-1, and losses by EBF and Clarke, gave the Dees their third consecutive South Central Conference championship. They end the conference season at 11-1 with a win over Clarke on Monday night.

Albia exploded for five runs in the second inning against 20-16 Fairfield, champions of the Southeast Conference, beating the Trojans 6-1 for their 16th straight win.

The Albia junior varsity softball team finished the season unbeaten with only a tie to blemish a 12-0-1 record. The Dees did it in old school style, beating Fairfield 2-0 with a pair of runs in the fourth and near perfect pitching by MacKenna Jones.

The Dees unloaded five hits including a two-run double by clean-up hitter Jena Lawrence, a two-run single by Abbie Martin, an RBI single by #8 hitter Rylee Leshen and a single by Ellie Spurgin hitting in the ninth spot. Five runs cross the plate and Albia went on to a 12-2 first round regional victory over Saydel.

The Eddyville-Blakesburg-Fremont softball team rolled to a 9-3 win over Chariton in the first round of regional play.

A MacKenna Jones homerun sends Albia past Clarke and into the regional final.

Jena Lawrence handed the ball off to MacKenna Jones in the fourth inning to finish Albia’s game against North Polk on the mound. Then in the eighth inning, she ended the game with a heart-stopping three-run walk-off homerun to send the Lady Dees back to the state tournament for the third straight year over 12th ranked North Polk.

The 8-21 Blue Demons showed incredible grit and determination, holding off the Rockets until the final bat of the bottom of the seventh inning before losing in the first round of tournament play.

The Lady Dees fall 8-5 to Columbus Catholic in the first round of state tournament play despite a grandslam by Alex Beard. The Dees fall to Algona in the consolation round.

Juniors Alex Beard and Jena Lawrence were named to the Class 3A first team and senior Kennedy Schroeder was named to the second team.

Albia’s all-state catcher, Alex Beard, continued to receive honors for her 2019 softball season. The senior to be was named the Ottumwa Courier’s Player of the Year last week and on Sunday was named to the Des Moines Register Class 3A first team All-State team. Eddyville-Blakesburg-Fremont’s Reina Taylor, a senior, was also named to the first team.

It’s hard to imagine starting out the Albia volleyball season any better after the Dees beat 2018 Class 1A state qualifier and seventh ranked Montezuma four out of five games in pool play and in the title match to win the Albia Tournament Monday night. The Dees met the Braves in the first round of pool play and posted 21-18 and 21-16 victories.